Tahk Myeong-hwan was murdered four weeks after Sun Myung Moon spoke about him as an opponent.

On November 4, 1993 Pak Chung-hwa, who was a follower of Sun Myung Moon from the early years, published “The Tragedy of the Six Marys – the real Satan is Sun Myung Moon!!” (by Constant Friend Publishing). The content included the accusation that Sun Myung Moon used his own teachings exploitatively to have sexual relationships with many women followers.

[Tahk Myeong-hwan wrote the introduction to The Tragedy of the Six Marys.]

On January 21, 1994 Sun Myung Moon spoke about Tahk Myeong-hwan who was opposing the Unification Church. On February 18th of the same year Tahk died. (Tahk was murdered by members of a new religious group). On the very same day a man who had not listened to the instructions of Sun Myung Moon, and wanted to make a political party, also died.

Moon specifically mentioned that those who oppose the cult will be taken to the spirit world.

LINK to Japanese source of above quotes

In Korea many Christian leaders, to this day, suspect that Sun Myung Moon was behind the murder of Tahk Myeong-hwan.

See end of this page for further research about his murder.

How to Fight Against the Cults
– A Report for Preventing Cults –

I, Tahk Myeong Hwan, was born on July 8, 1937 in a farm village called Daejuk-Ri, Paeksan-Myun, Puan-Kun, Chunla puk-Do, and became a christian as a child.
As far as my educational background is concerned, I graduated from Chonju Shinheung Mission Senior High School in 1955, obtained a B.A. in 1960 after majoring in philosophy at Chunpuk National University, majored in theology at Yongnam Theological Seminary, and obtained an M.A. after majoring in Christian Education at Yonsei University United Graduate School of Theology.

After my studies, instead of engaging in the ministry for 5 years I pursued a career in the area of Christian mass media. And it was in 1968 that I started to research into cults and their damaging (deteriorating) impact on our society. At first, for the study of cults, I led an institute with the name of the ‘New Religions Research Institute’, which was later changed to the ‘Korean Religions Research Institute’. And now I organized and lead the ‘International Religion Institute for the Study of Cults’ all over the world.

Along with continuing the research, I have given lectures at more than 20 Korean universities, many churches, different Christian Institutes, Police Academies, and the National Defence Academy. Furthermore, I was given valuable opportunities to give seminars to the Korean immigrant communities in Japan, the U.S.A. and Canada.

Consequently I realised that I have given more than 2,000 lectures between 1970 and 1988, which has resulted in my being well-known in the Korean cult research field.

I have written a total of 16 books on cults from 1971 to 1988. Many of these are used as text books of curricula in Christian seminaries. And as they are being read by many ministers, they became the best sellers at Christian book stores all over the country. Since 1980, I have published a monthly magazine called ‘Modern Religions’ which is playing a leading role in furnishing theological students and ordinary believers, as well as ministers, with information about the current issues, facts, and the dangers of cults.

Such intense activities about cults have not only brought me much support, encouragement, and popularity, but also many enemies. Among many, the Unification Church, better known as the “Moonies”, have been the most extreme one.

Many examples of their extreme violence and hindrance to stop me are as follows: in 1970, they offered me approx. $450,000.00 in exchange of my discontinuation, but they failed to stop me; In 1979 they slandered and called me a communist. Following that I was arrested and tortured by the KCIA for 12 hours; I was accused of rape; In 1979 they forged my name meanly and made fraudulent announcements including my apologies to the Unification Church in the daily newspapers; on May 3, 1985, someone set a bomb on my car which eventually blew up and lead me to be hospitalized for one month; On October 18, 1988, I was raided by approx. 300 Unification Church members while giving a lecture, and was also hospitalized for one month. I have been attacked by cultists 63 times in the past 20 years. 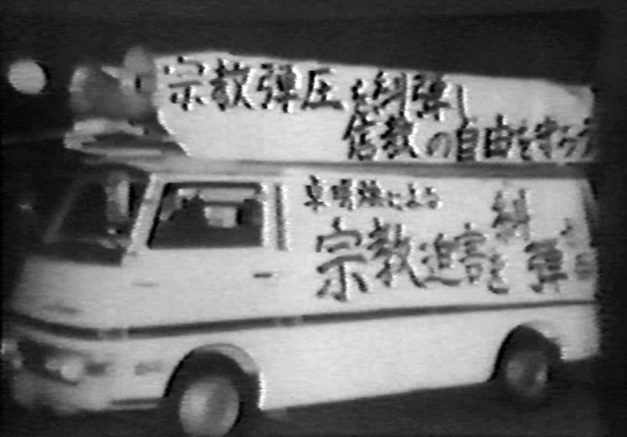 ▲ Tahk Myeong-hwan gave a talk about the Unification Church in a church in Kyoto, Japan, on October 27, 1983 (exact date to be confirmed).  The UC van outside carried these slogans: 宗教弾圧を糾弾する “Condemn religious repression,” 信教の自由を守ろう “Protect the freedom of religion,” 卓明煥による宗教迫害を糾弾する “Denounce religious persecution by Tahk Myeong-hwan”. About 150 UC members turned up to demonstrate; many were probably CARP members from Kobe. They tried to get into the church, but fortunately the police arrived very quickly and prevented that. One demonstrator was arrested by the police for assault. The UC leader was arrested because he did not have a permit for the demonstration.

The most serious incident, perhaps, was when the cults joined with a few political figures whom they were financially supporting, and tried to ruin me with many knavish ways. Threatening phone calls and intrusions into my home and my Research Institute have become a habitual experience in my life.
There have also been incidents in which these cults published books and other printed materials accusing me of being at fault, and sent them to Christian churches all over the country.

When my lectures and seminars were scheduled in the U.S., they have sent discouraging letters to the consul general of U.S.A. in Korea not to issue my visa. In Korea, there are approximately 4,000 Christian church leaders, 3,000 college or university professors and 40 politicians, including a former presidential candidate, who are under strong influence of the Unification Church – financially, physically and spiritually. 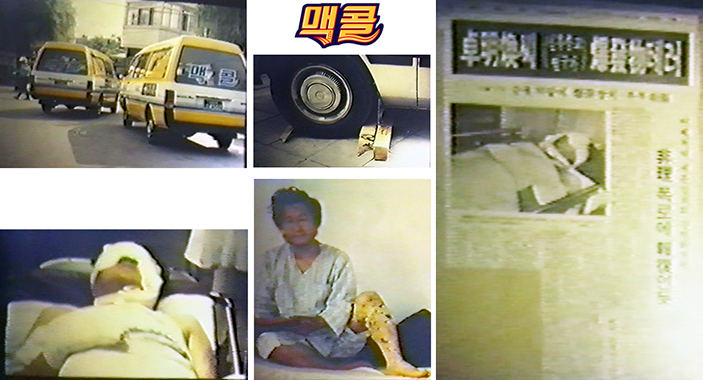 ▲ Clockwise: Two vans from the 맥콜 McCol Unification Church business were photographed leaving the scene of the car bomb attack in Korea; the McCol logo which is written on the back of the vans; Tahk’s immobilized car; a newspaper report with Tahk’s name, 卓明煥, in the headline; Tahk recovering in hospital showing his injured leg, and Tahk wrapped in bandages. He was left permanently deaf in one ear.

These endless threatening situations surrounding my life everyday make me feel that today may be my last day. That’s what motivates me to live today glorifying my Lord as best and most sincerely as I can do. Cults may have money and power, but I believe that God is in me and I also know that someone has got to do this task as long as there are powers of darkness on earth that will destroy human beings’ spiritual and physical lives.

As I end this report, I think these may be my last words. But, I firmly believe that God is a just God and that the lives of human beings are in His hands. As Livingston left famous words saying, “One charged with a mission will not die until that mission is accomplished”. I believe that as long as I have this mission to complete, the Lord will protect my life from the enemy.

And now, four cases of lawsuits brought by the Unification Church against me are in the course of being judged. But I believe that there is nothing to be afraid of in Him. God is my Lord and will help me out thoroughly.

I have included some evidence here to prove that the contents of the above report is true.

I hereby certify the above statements to be true and correct in every detail.
TAHK, Myeong Hwan

Newsweek magazine on the many Korean messiahs of the 1970s

Tahk Myeong-hwan wrote about the cult which was partly blamed for the assassination of late South Korean president Park Chung Hee, and has now destroyed the political career of his daughter, Park Geun Hye, the ousted president. The cult was led by Choi Tae-min.

“In Korea, one even senses a fear, like one induced by the Mafia, among the opposition, and … outspoken opponents speak of death threats.” Professor Sontag, 1976

Philosopher/theologian/author Frederick Sontag was uniquely qualified to write about the Unification Church. He spent ten months and traveled three continents looking at this church. In September 1976 he visited Korea.

In 1977 he met Rev Moon for a long interview. His book: ‘Sun Myung Moon and the Unification Church’ was published later the same year.

page 87
I spent one day interviewing people outside the church [in Korea] through contacts I had made before leaving America. These varied from impartial “old Korea hands” to bitter, fearful, and hostile opponents who talked darkly of reprisals.

page 88
Interview with a non-church member: “At that time real bad rumors were going around about this Moon.”

page 97
Who’s afraid of Sun Myung Moon? It is fascinating to see Sun Myung Moon receive intense devotion and love from his followers and at the same time draw derision bordering on hatred from those outside. In Korea, one even senses a fear, like one induced by the Mafia, among the opposition, and in this country the outspoken opponents speak of death threats.

His followers project more on to him than he claims. To them he is a symbol and focus of what is good. To outsiders he appears the perfect embodiment of the Antichrist. Who is this man? Should we fear or love him?

Dr. Tahk was murdered by one or two thugs who beat him with an iron pipe and stabbed him with a long knife outside his 2nd floor home in Seoul.

JoongAng Daily of Korea described the group in an article dated May 26, 2014: “A Christian doomsday cult in the 1980s called Yeongsaeng-gyo, literally “Eternal Life [Church],” ended badly after founder and leader Cho Hee-seong was charged with extorting money and labor from his believers and ordering some to kidnap and murder nine people who were trying to flee the religion or who slandered Cho. He was declared not guilty of murder due to a lack of evidence but was sentenced to two years in prison for harboring convicts. He died of a heart attack in prison in 2004.”  LINK to JoongAng Daily

Dahn Yoga or Dahn World, which originated in Korea, may also be connected to the murder of Dr. Tahk. Apparently a man called Im Hong-chin from Dahn Yoga was jailed for the crime.

Video: “Mr. Tahk Myeong-hwan was attacked on February 18, after [he had given an] interview, by followers of the Korean new religion “Yeongsaeng-gyo”
He died at the age of 55.”
LINK to a full transcript of the video

The leader of Dahn World, Lee Il-chi, became very rich, and there were legal claims from women who said he had sexually abused them. (Dahn is the Korean for “energy”.)

Lee Il-chi 李一指 (born Lee Seung-heun 李承憲 ) “reportedly had help from Hwa-young Moon, a Korean woman who joined Dahn in the late 1980s and whipped [the theology] into shape; she knew a good deal about the enlightenment trade, having grown up in the “Moonies,” the Unification Church.” (Rolling Stone magazine, 2010 LINK)

…Lee first opened his eyes to the enlightenment in 1980. According to Dahn World, President Lee achieved his “Great Connection with the Heaven” on July 15, 1980 at Moak Mountain behind his wife Sim Journg-Sook’s birth home.”

Lee left two sons and his wife.
[Moon left his first wife, Choi Seon-gil, and infant son in 1946; in July 1955 Moon sent his third wife, Kim Myung-hee, to Japan. She gave birth about six weeks after arriving in Tokyo. She remained in Japan with their child until 1959. Moon never sent her any money, or any support for their son, Moon Hee-jin.]