Sun Myung Moon: If Jesus had married his half sister, he would not have been crucified! 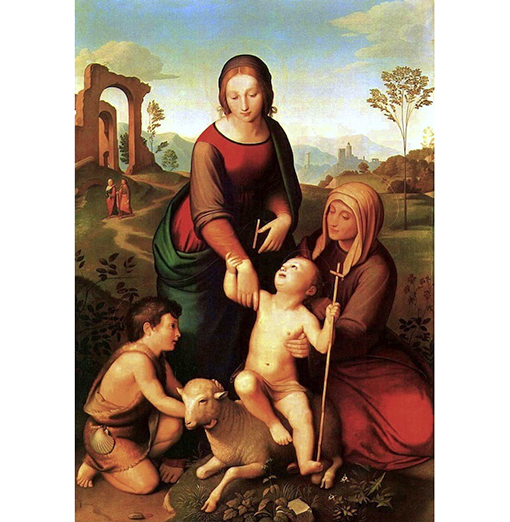 The painting is of Elizabeth and Mary with John the Baptist and Jesus.

Incest is required in Sun Myung Moon’s “Providence of Restoration”

Moon: “Who was the father of Jesus Christ?”
Audience: “Zechariah”
Moon: “Zechariah. This followed the same formula of legal wife and mistress. The mistress was Mary, and the legal wife was Elizabeth. The relationship between Elizabeth and Mary was just like that between Leah and Rachel. Zechariah’s family should have restored Jacob’s family; they had exactly the same course. Elizabeth should have restored Leah’s position and then introduced Mary to Zechariah. The result of the relationship between Zechariah and Mary was the birth of Jesus Christ. With Mary and Jesus united as plus and minus, and Elizabeth and John the Baptist united as plus and minus, a greater plus and minus would have been created by the unity between the two wives and two sons. If this process of unity had taken place, all of history would have been completely restored. Everything would have been solved if Jesus Christ had been safely married.

Why could Jesus Christ not get married even by the age of thirty-three? Jesus Christ is the true Adam, isn’t he? As the completed Adam, he was connected to the True Love of God. If one such man and woman are united in marriage, they would have the position of royalty on the national level. If this marriage had been completed, everything would have been accomplished.

Why couldn’t Jesus get married even by the age of thirty-three? Restoration is accomplished through indemnity. The fall involved a relationship between the archangel, Eve and Adam, culminating in Cain and Abel. Lucifer’s betrayal involved taking away Adam’s sister, Eve. Jesus’ position was Adam’s position, and John the Baptist’s position was the archangelic position. All these historical events led up to John the Baptist’s younger sister being in the position to become Jesus’ wife. With Jesus destined to be in the elder son’s position, John the Baptist’s younger sister would have become Jesus’ wife and all of history would have been restored.

When Jesus Christ was seventeen years old, he told Mary whom he should marry. Jesus Christ spoke strongly about the necessity for this marriage, no matter what sacrifices might need to be made, but Mary could not accept it. Mary went through such a severe course after her relationship with Zechariah. She experienced much persecution from the environment. If this sexual relationship had been publicized, people would have stoned her to death. If Joseph had not declared that her baby was his son, Jesus and Mary would have been stoned to death. Joseph was the savior of Mary and Jesus Christ. If Mary had confessed who her child’s father was, there would have been a problem. Thus Jesus and John the Baptist’s sister had the same father, but different mothers. They were half-brother/sister. John the Baptist knew very well that Jesus Christ was an illegitimate child. When John the Baptist received the revelation that Jesus was God’s beloved son, he could not accept that an illegitimate person was the messiah. Under these circumstances, for Jesus to marry John the Baptist’s younger sister was unacceptable. Although they had different mothers, they were both children of Zechariah. How could people accept such an incestuous relationship?”
https://www.tparents.org/Moon-Talks/SunMyungMoon95/SM950207.htm

“If Jesus had married John the Baptist’s younger sister, would he have had to go to the cross? No, he would not have had to have been crucified. John the Baptist knew the good side, but it simply did not occur to him at that time, according to his standard of morality. He thought, “How can a person like Jesus, in such a miserable position, ever be the Messiah?” He did not believe God would send a person in that situation to be the Messiah.”
http://www.tparents.org/Moon-Talks/SunMyungMoon93/930214.htm

According to Sun Myung Moon, the most important relationship is that between parent and child. Satan claimed that relationship at the fall in the Garden of Eden. Therefore, to restore that relationship, incest on the side of God must be performed. That is why Jesus should have restored his mother, Mary, by having sex with her.

Sun Myung Moon explained about this heavenly incest is his speech of August 9, 1997 “Chil Pal Jeol” given to 7000 FFWPU leaders from all over the world at the Central Training Center in Guri near Seoul. (The Korean and Japanese texts are the most accurate; the English translations are heavily redacted.)

Sun Myung Moon (translated from the Japanese):
Chil Pal Jeol (7.8 Jeol) Declaration Of The Realm Of Cosmic Sabbath For Parents Of Heaven And Earth
“When Adam and Eve fell and became victims of the Archangel, Satan took away his beloved wife, destroyed all his sons and daughters, and destroyed his families and the whole world. How are we supposed to forget this fact? …
For that reason (the fallen world) came into incestuous relationships. What is the closest relationship? It is the parent-child relationship. Confusion happens in the closest love relationships. …
So Satan, who opposes God, took away everything that is precious in the world. What God thinks is the most incredibly precious is an absolute ideal relationship with close relatives, and not incest. It is said that it had made it to an incestuous relationship.”

Sun Myung Moon’s plans to impregnate Mrs. Jesus back in 1978

She was a Korean woman [ Chung-soon Chang 張貞順 ] assigned by Reverend Moon to be the wife of Jesus back in the 1970s.  He wanted to have children for Jesus through this woman but Mother [Hak Ja Han] and Ye Jin Nim found out about the plan and a big row broke out. Apparently, Mother threatened to leave Father if he went ahead with it.

It comes from a conversation that Dennis and Doris Orme [leaders of the Unification Church in Britain at the time] had with Mrs. Won-bok Choi. Mrs. Choi told them that Mother [Hak Ja Han] and Ye Jin Nim had found out about Father’s plans to do Mrs. Jesus, and that this was why True Parents had been arguing so heatedly. That was 1978. I expect that Mrs. Jesus was a lot better looking then than she is now.

They were six married women who Sun Myung Moon had sex with, one after the other, to perform “sex evangelism.” According to Mr Chung-hwa Pak’s book, the reason was Moon’s peculiar interpretation of Christianity. Eve had sex with Satan and so all mankind became descendants of the devil. The mission of Jesus Christ was to take Eve back from Satan who had stolen her from God. To do this Christ must have sexual intercourse, pikareum, with six married women, including Mary – Jesus’ own mother. But Jesus Christ left this world having failed to save even one married woman by doing pikareum with them. So God sent Sun Myung Moon to earth as the third Adam. His mission was to cleanse the blood of six married women, namely the Six Marys. This was to be done by pikareum with Moon three times. Through a kind of relay sex with these Marys, humankind could be cleansed and saved and brought back to God’s side for the first time. It was Moon who preached this “Principle” to Mr. Pak. (This explanation comes from a magazine interview Mr Pak gave to a famous Japanese politician. LINK to magazine )

In the early days Sun Myung Moon often dismissed ‘Marys’ and inducted new ones. (Compare the two photos below.) He unceremoniously threw out many women who then realized they had lost their dignity and all their money. Their husbands and children usually rejected them for their involvement with Sun Myung Moon. (A few women remained under the spell of Moon until the day they died. At least one could not face her losses and committed suicide.)

Nansook Hong: “I do know that my brothers and sisters and I were luckier than some children. Some of the Reverend Moon’s followers simply left their sons and daughters in orphanages in order to preach the word. A few never returned for them.”
In the Shadow of the Moons, page 35 Above and below: Two groups of ‘Six Marys’ with Sun Myung Moon in the mid 1950s. He threw out some women and inducted others. Moon restored Lee Deuk-sam (second from the right above, and lower left in the photo below.) She was the mother of his intended Leah and Rachel wives – Choi Soon-shil and Choi Soon-wha (the mother of Sam Park).

Sam Park explains HERE. Sun Myung Moon had sex with the mother and both daughters. The pikareum theology of Park Tae-seon was very similar to that of Moon.
See the pikareum lineage chart below.
Park “restored” his mother-in-law and the wife of his elder brother (who would have been in the ‘Cain’ position.) The idea of ‘heavenly incest’ was not unique to Sun Myung Moon. 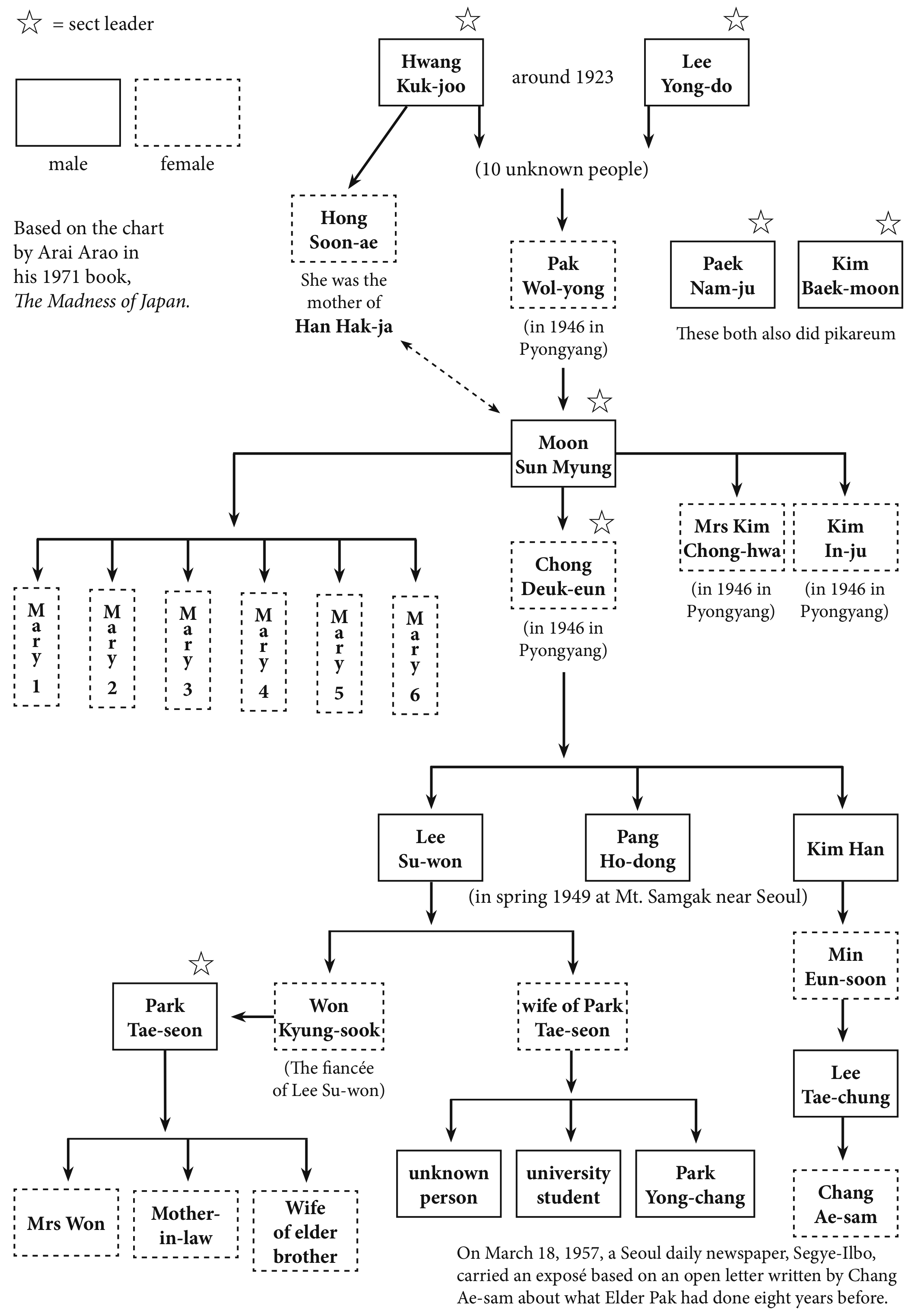 Lee Yong-do was excommunicated in 1932. At the same time Hwang Kuk-joo was branded a heretic. Sun Myung Moon was excommunicated in 1948 when he was jailed in Heungnam for bigamy. He had been accused of adultery in North Korea from 1946 until the time he was jailed. Paek Nam-ju got in trouble for sex and later gave up any messianic pretensions. In March 1956 Park Tae-seon was dismissed as an Elder. The General Assembly of the Presbyterian Church in 1956 classified his movement as a cult.

Links to further information on some of the people in the chart above:

The Tragedy of the Six Marys video transcript