Prime Minister Kishi of Japan, organised crime and the Moon involvement in Japanese politics gained protection for the UC of Japan 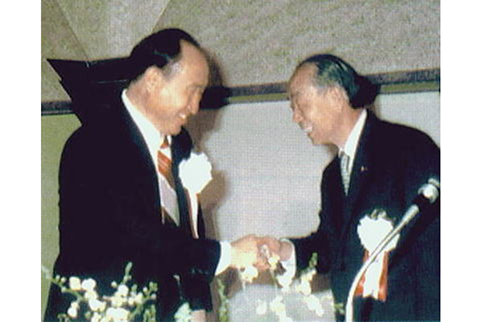 … Kishi Nobusuke (1896-1987) [Japanese Prime Minister 1957-1960], who was also an architect of the “transwar” system of industrial and economic policy. Yoshida and his disciples represented the more decorous “mainstream” of LDP [Liberal Democratic Party] hegemony and worked comfortably with the “orthodox” business community (seitoha zaikai). Kishi, by contrast, managed to maintain contacts with the mainstream while also connecting the non-zaibatsu business community and selected parts of the discredited prewar world of ultra-nationalist politicians and control bureaucrats (tosei kanryo) to the postwar conservative hegemony.

The political choices of each contributed significantly and quite directly to the “structural corruption” (kozo oshoku) that came to be a central feature of Japanese politics and that sustained conservative power. Yoshida’s contribution was made before the consolidation of the conservative camp, Kishi’s came later. The system was not the result of their collusion, but of their vigorous political competition. Yoshida never belonged to the Liberal Democratic Party. The LDP was created by Kishi and his allies to take power away from Yoshida  …

Even in a Cold War world of cynical opportunism and rapidly shifting alliances, Kishi’s postwar “resurrection” was remarkable. Kishi had been General Tojo’s closest deputy for nearly a decade, until the fall of Saipan. Yet, in June 1957, in the same U.S. Senate chamber where a decade and a half earlier a declaration of war against Japan had been approved, Vice President Richard Nixon banged the gavel to introduce Prime Minister Kishi Nobusuke, proclaiming him an “honored guest” who was “not only a great leader of the free world, but also a loyal and great friend of the people of the United States.” …

Kishi began building his political career long before the end of the war. He first ran for elective office in 1942, while serving as Minister of Commerce and Industry. The election, under the auspices of the corporatist Imperial Rule Assistance Association (Yokusan Seiji Taisei Kyogikai – IRAA), was minimally competitive, as two-thirds of the successful candidates had been “approved” and subsidized by the state. Future LDP leaders Hatoyama Ichiro, Kono Ichiro, and Miki Bukichi were among the eighty-five successful independent candidates, as was the future political “fixer,” Sasakawa Ryoichi.

The wartime campaign gave him considerable insight into the darker side of campaign financing. There were rumors that Kishi had already enriched himself and his political allies while serving as a bureaucrat in Manchuria. Connections to the opium trade through radical nationalists and to industrialists, combined with his personal control of the movement of capital in and out of the puppet state, made Kishi singularly influential – and likely very rich. Indeed, while still in China Kishi became known for his consummate skill in laundering money. It was said that he could move as much money around as he wished “with a single telephone call,” and that he did so both legally and illegally and for public and private purposes. By the time Kishi returned to Tokyo in 1939, he had built up an impressive network of political allies inside and outside government. He was already the prototypical LDP political elder. …

Kodama Yoshio (1911-1984) cast a ubiquitous shadow over many of the less pleasant aspects of pre- and postwar Japanese politics. After serving time in jail for plotting the assassination of leading prewar business and party leaders, he spent the war years in China where he procured strategic materials for the military. The activities of his “Kodama Agency” reportedly included drug trafficking, smuggling, and black marketeering. War profits made Kodama a personal fortune, which he was quick to turn to political advantage. He was said to have been released from Sugamo prison after making a deal with the occupation authorities to work for U.S. intelligence. …

Kishi first called upon Kodama, whose modus operandi, according to Jacob Schlesinger, “was blackmail, intimidation, and violence,” to provide protection for Indonesian president Sukarno during the latter’s visit to Tokyo in early 1958. The Tokyo Metropolitan Police had refused to help on grounds that it was a personal, rather than an official visit. Kishi again called upon Kodama in 1960 to use his gangland connections to battle student demonstrators and to help the government protect President Eisenhower … 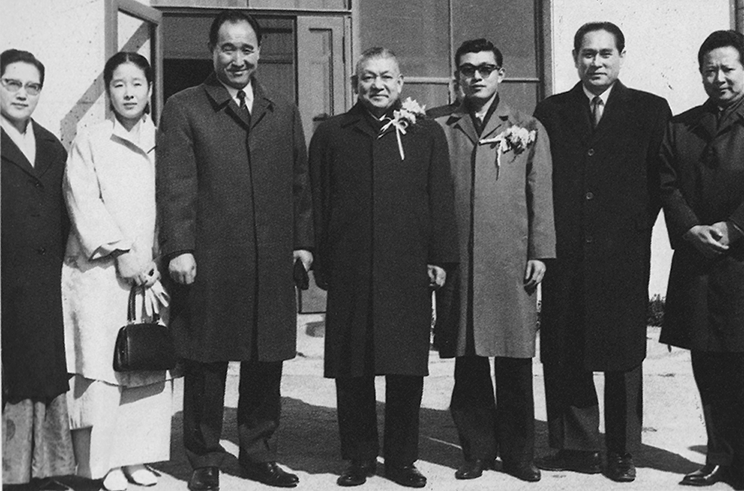 ▲ Left to right: Choi Won-bok (a ‘second wife’ of Moon), Hak Ja Han, Sun Myung Moon, Sasakawa Ryoichi, unknown, Eu Hyo-won (who wrote the 1957 Divine Principle and was the main lecturer and organizer of the UC in Korea in the late 1950s and 1960s) and Kuboki Osami (leader of the UC of Japan).

Sasakawa Ryoichi (1899-1995) was the more complex of the two Kishi-era kuromaku. Drafted into the Imperial Navy as a pilot in 1918, Sasakawa returned home after two years of service to expand the family fortune by speculating in rice futures. He later turned his energies to rightwing politics, possibly including membership in the violent Black Dragon Society. In 1931, Sasakawa used his own resources to establish the National Essence Mass Party (Kokusui Taishuto). His 15,000 party members, one of whom was Kodama Yoshio, wore black shirts and modeled themselves on the Italian fascists. Sasakawa was a maverick. He controlled a small independent air force of twenty-two airplanes, which he made available to the Navy for training, and took it upon himself to airlift supplies to the Japanese troops after the 1931 Manchurian incident. Later he was arrested for alleged plans for “patriotic violence,” including plots against the prime minister and other government officials. After spending two and a half years in jail (1935-1938), he flew one of his planes to Rome to meet Mussolini. … but his postwar political career was cut short by his arrest and imprisonment as a war criminal. … 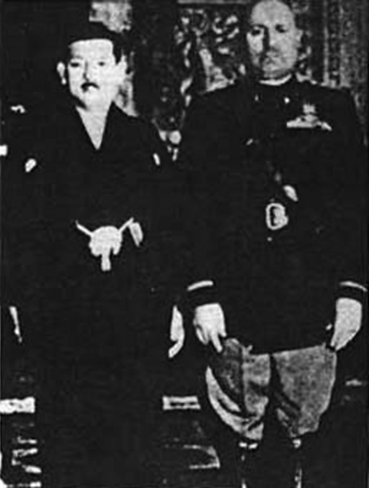 Another aspect of Sasakawa’s postwar political agenda, anti-communism, dovetailed neatly with his efforts in conservative politics. Working closely with Kishi, he cultivated relationships with other anti-communists throughout Asia. In the mid-1960s,

this brought him into contact with the Reverend Sun Myung Moon, founder of the Unification Church.

In 1967, Sasakawa invited the Unification Church to use his motorboat racing center in Yamanashi prefecture for its first rally in Japan. The following year, three months after the Reverend Moon established his “Federation for Victory over Communism” (Shokyo Rengo) in Korea, Sasakawa agreed to become its honorary chairman in Japan. Kishi was impressed by the Federation, suggesting that “If all younger people were like Shokyo Rengo members, Japan would have a bright future.” In this way, Sasakawa and Kishi shielded what would become one of the most widely distrusted groups in contemporary Japan.

Although loathed and feared for its alleged kidnappings and mind control of young Japanese, the Unification Church proved (and may still prove) to be of incalculable benefit to many Japanese politicians.

It built its Japan headquarters on land in Tokyo once owned by Kishi. 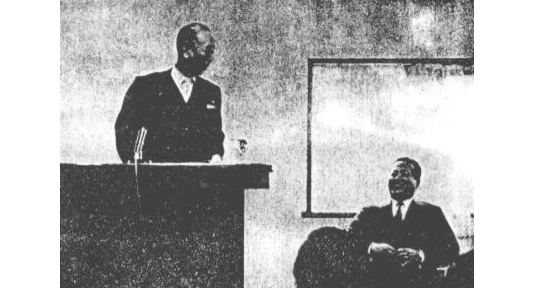 By the early 1970s, a number of LDP politicians were using Unification Church members as campaign workers. While the politicians were required to pledge to visit the Church’s headquarters in Korea and receive Reverend Moon’s lectures on theology, it did not matter whether they were members of the Church. Actual Church members – so-called “Moonies” – were sent by the Federation to serve without compensation as industrious and highly valued campaign workers.

In return, for many years the Church enjoyed protection from prosecution by Japanese authorities for their often fraudulent and aggressive sales and conversion tactics.

Not incidentally, by the 1980s, Japan reportedly provided some four-fifths of Unification Church revenues worldwide.

Over time, the Kishi and allied factions transferred the Kishi-Sasakawa-Moon link to other party leaders. In 1974, Fukuda Takeo, the direct inheritor of the Kishi faction, praised Reverend Moon as “one of Asia’s great leaders,” while Nakasone Yasuhiro, the youngest member of the Kishi Cabinet and scion of the allied Kono faction, similarly honored Moon. Abe Shintaro, Kishi’s son-in law and inheritor of the faction from Fukuda, also depended upon “Moonies” in his election campaigns.

A list prepared by the Japan Communist Party of 126 LDP and DSP politicians who used “volunteers” from the Federation for Victory over Communism to staff their campaigns includes Ozawa Ichiro, Hashimoto Ryutaro, and other senior party leaders. In the 1990 general election, the Unification Church announced that it had provided financial and campaign support to more than one hundred Japanese Diet members.

As a measure of the influence Moon enjoyed in Japan, in 1992 the government gave him special permission to enter the country even though Japanese law forbids entry to a foreign national who has served more than year in jail. Moon had served eighteen months in U.S. jail for tax evasion and had been barred from entering Japan on these grounds for nearly a decade. In March 1992, Kanemaru Shin, vice president of the LDP and the head of the largest faction within the party, intervened on Moon’s behalf with the Minister of Justice.

RICHARD J. SAMUELS is Ford International Professor of Political Science and director of the Center for International Studies at the Massachusetts Institute of Technology. He has written numerous books on Japan, including Rich Nation, Strong Army: National Security and the Technological Transformation of Japan (Cornell University Press,1994), which won the 1996 John Whitney Hall Prize of the Association of Asian Studies. He has recently completed a comparative political and economic history of Italy and Japan, of which this paper is an edited excerpt. It is used with the permission of Cornell University Press. Professor Samuels received an Abe Foundation fellowship in support of this research and was affiliated with the Institute of Social Science, University of Tokyo. In October 2001, Samuels was appointed Chairman of the Japan-U.S. Friendship Commission.

To read the whole article see:

Kishi and Corruption:  An Anatomy of the 1955 System

The Unification Church encyclopedia also referenced this document after the sanitized biography of Kishi:

Inside the League – The Shocking Exposé of How Terrorists, Nazis, and Latin American Death Squads Have Infiltrated the World Anti-Communist League
by Scott Anderson and Jon Lee Anderson

Sun Myung Moon – The Emperor of the Universe

FBI and other reports on Sun Myung Moon

1. Shadows on Rev. Moon’s beams. Politics and religion interwoven.
.   Chicago Tribune – Sunday, November 10, 1974
2. Howling at the Moon – Chicago Reader Weekly  Friday, November 22, 1974
3. Messiah Moon on the Run
4. The Unification Church: Christian Church or Political Movement?
–  by Wi Jo Kang (1976)
5. Moon’s Sect Pushes Pro-Seoul Activities – by Ann Crittenden .
.   The New York Times,  May 25, 1976
6. Panel Told Seoul Used Followers of Sun Myung Moon for Protests .
.   The New York Times,  June 7, 1978
7. Unification Church Protected by the Regime in South Korea .
.   週刊ポスト  Shūkan Post magazine  October 15, 1993
8. American Dynasty: Aristocracy, Fortune, and the Politics of Deceit in the House of Bush – by Kevin Phillips (2004)
9. Missing Pieces of the Story of Sun Myung Moon – by Frederick Clarkson (2012)
10. Sun Myung Moon was nominated for the Nobel Peace Prize in 2002.
It seems the manufacture of Moon’s ‘Autobiography’ was an attempt to promote Moon for the Nobel Peace Prize. However, the publisher of the book was jailed for four years for fraud – for buying books from stores and republishing them to push the book up the best-seller list, and for other financial crimes.
11. ‘Privatizing’ Covert Action: The Case of the Uniﬁcation Church
Dr. Jeffrey M. Bale   Lobster #21.   May 1991   Introduction   NEW