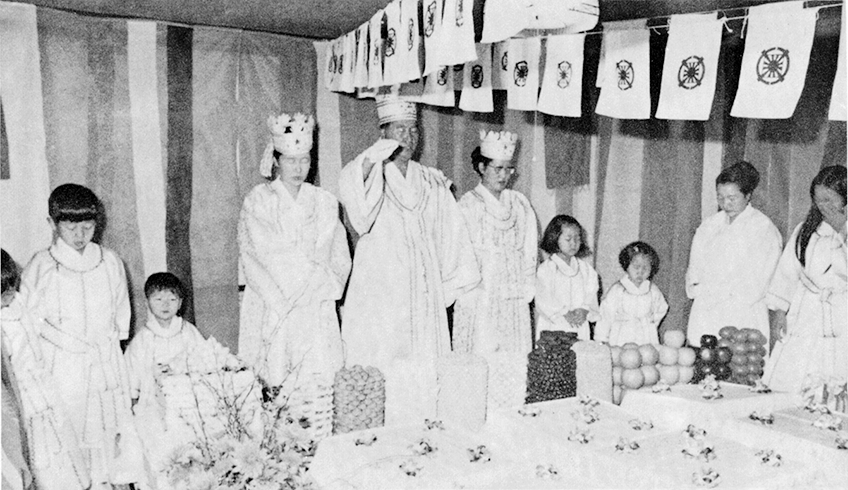 On January 1, 1968 “God’s Day” was declared, and was to be held on January 1st of each year. It signifies how the Religion Leader Moon was victorious in defeating hundreds of millions of Satans and rescued mankind, returning them to God.

The woman on the right, with her hair tied up, could be either
Kyŏng-Jun Lee 李京埈 (married to Confucius)
or Jong-ok Lee 李貞玉 (married to Mohammed).

This explanation was on WIFL (What is Father’s Legacy? blog) and WIOTM (What is on the Moon blog) and was also sent to Sam Park and others by the author:

“Howard, there was a time – after I began hearing rumours of this or that about the True Family – when I took the same position as you. It was almost impossible to separate facts from distortions, exaggerations and outright lies. Like you, I took refuge in equating Father’s actions with the accounts of providential affairs in the Bible as explained by the Divine Principle.

When the storm broke after Nansook went public with her allegations [LINK], which included the existence of Sam [Park], born from a relationship with a concubine which continued after the Holy Blessing of True Parents in 1960, I concluded that such oblique and veiled explanations as had been given previously by lecturers such as Rev. Sudo were no longer sufficient.

Rev. Moon responded to the situation by convening a gathering of members at East Garden. At this meeting he gave an assurance that he had never misused his sexual organ. There was no explanation for his role in fathering Sam, although the question was uppermost in the minds of many. Instead, he asked the members to maintain their trust in him.

Like others, I’m sure, I waited for years for him to trust us with an explanation from the Principle. I also began to wonder if the immoral behaviour of some of his children might be connected with a degree of confusion in their own minds, in that they might have lost their own moral compass after finding out about their father’s complicated relationships.

Still there was apparent silence from True Father, although as John Clark has informed us, he did insist on parading four of the final six Marys at the launch of his autobiography [released in South Korea on March 9, 2009], according to Hyung-jin in one of his recent sermons. It has also been said elsewhere that he wanted to say more on the subject in his later hoondokhaes, but that True Mother vetoed their publication. [see below photo of Sun Myung Moon with Six Marys.]

And so he ascended in September 2012 with the subject of providential affairs unresolved. Almost immediately afterwards, the long-suppressed facts of In-jin’s affair(s) were brought into the open through the undeniable proof of the birth certificate of baby Erik Lorentzen. Eventually this triggered an in-depth investigative article in The New Republic magazine.

Although the writer, Mariah Blake, originally homed in on In-jin’s and her husband James’ marital and financial affairs, as she dug deeper she encountered Nansook’s story, with its references to Rev. Moon’s own extra-marital affairs, and she eventually tracked down Sam and his mother. Their in-depth testimonies became the subject of a story in Mother Jones.

From The New Republic: November 25, 2013 – page 37
“As it turns out, Moon did not always live up to his virtuous teachings, either. In April, I spoke by videophone with Annie Choi [also known as Soon-wha Choi], a soft-spoken, 77-year-old Korean woman with ruddy cheeks and thick silver hair. Choi, who joined Moon’s church along with her mother and sister in the 1950s, alleges that she engaged in numerous sexual rituals – some involving as many as six women – beginning when she was 17 years old. Her story, which is consistent with the accounts of several early followers, supports the claim that Moon’s church started out as a sex cult, with Moon ‘purifying’ female devotees through erotic rites.” LINK to The New Republic

From Mother Jones: December 9, 2013 – online edition
“Initially, he [Moon] had only a few dozen followers, who met in a two-room house on the outskirts of town [Busan] and were expected to sacrifice everything for the church. For young female members, this included their virginity. Choi [Soon-wha Choi or Annie Choi] says the initiation rites for early female disciples involved having sex with Moon three times. She also alleges that Moon kept a stable of a half-dozen concubines, known as the Six Marys, and inducted her into the group when she was 17. Sometimes, she adds, he would assemble them all in a circle and take turns mounting them.”
LINK to Mother Jones    LINK to PDF

I knew about these allegations for some time before they were published. Some of them were apparently submitted as sworn testimony by the lawyer acting for Sam and his mother, which were immediately sealed at the request of lawyers acting for the Moons and Dr. Bo Hi Pak. After all, it wouldn’t do for members to find out such shocking stuff.

One of these allegations, which Sam had shared with others before the documents were drawn up, concerns the ritual by which Rev. Moon established God’s Day on January 1, 1968. He summoned six women to a special meeting. The group comprised Won-bok Choi, in the position of Leah, at the head of one trinity, whose other members were later blessed in marriage to two of the great saints. The second group was led by Hak-ja Han, in the position of Rachel. However, one of the Marys was missing – Sam’s mother, Soon-wha Choi, who was in America at the time – although the fifth position was filled by another of the future wives of the great saints. The ceremony consisted of Rev. Moon mounting each of them in turn, exactly as described in Mariah Blake’s article. He went round three times. Because Sam’s mother was not there to complete the number six, he wiped his seed onto a pair of womens’ underpants and instructed Hak-ja Han to send it to Soon-wha Choi so that she could wipe it onto her private parts and thereby complete the condition in front of heaven.

In the name of all that is holy, what Biblical precedent did this ceremony relate to? As God is my witness, I have every reason to believe that this story is true. From now on, members will need to reevaluate their faith in this light, and maybe even more from Hyung-jin.

When the above was first made known to me, I went into a state of shock. I had sleepless nights, as my imagination ran wild. Even now, it gives me no joy to write about the subject. …

Now the members are faced with another, much greater and longer-lasting cover-up, which the Korean leaders all know about.” 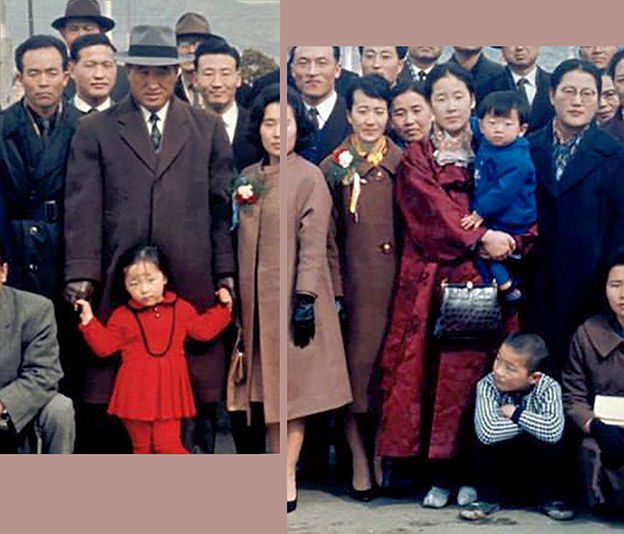 [Miss Young-oon Kim was in Korea at around the time the above photo was taken. Miss Kim was married to Mr. Ahn M.D. PhD in Korea on November 4, 1964. He was NOT a member. The marriage lasted less than a year. LINK.] 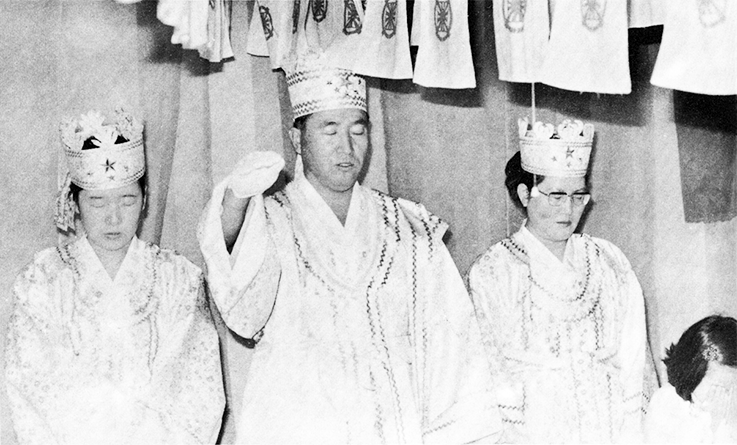 The antlers on the crowns are similar to those seen on shaman crowns. The antlers represent sexual fertility.

“Thank you for replying to my email. I was writing from memory, so I decided to send the post to Sam for a fact check. He said that I should have described the item used in the ceremony as a women’s undergarment, rather than underpants. He will check further with his mother [Annie Choi] as to what she had to do with them after Hak-ja Han gave them to her later on. It is possible that she did not have to perform a ceremony with them herself, but simply take receipt of them. I may have conflated that part with what we had to do with our holy handkerchiefs [during our Three Day Ceremonies]. I apologise for the error, if that is the case. Anyway, it is a relatively minor detail in the overall description.” 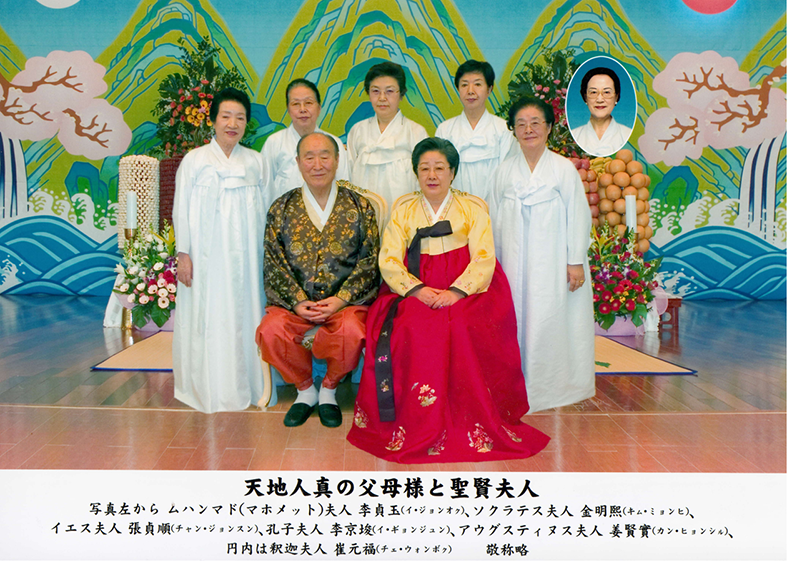 The Making of a Moonie – choice or brainwashing? (1984)
by Eileen Barker

page 265 note 31.  “In conversations with scores of non-Unificationist Koreans the first information I have been given about the Unification Church has, in almost every instance, been that Moon engages (or has engaged) in immoral sexual practices with his followers.”

The testimonies of Annie Choi and her secret son, Sam Park

Sam Park responds to feedback from his 2014 presentation

The Unification Church is unequivocally not Christian

The Moons’ God is not the God of Judeo-Christianity

What was Moon teaching? Pikareum – Moon’s sex theology explained from his own speeches

Moon sex scandal at Ewha Woman’s University in the headlines

Moon was Found Guilty and Started a Two Year Jail Sentence in Seoul in September 1955. Did Moon followers use money from prostitution to get him out of jail?

Change of Blood Lineage through Ritual Sex in the Unification Church by Kirsti L. Nevalainen

Shamanism is at the heart of Sun Myung Moon’s church although it uses a Christian signboard
– ancestor liberation, bowing to a pig’s head, liberating the spirits of significant historical figures in ‘providential’ nations, etc.

Sun Myung Moon – Emperor, and God
Moon copied the Enthronement Hall of the Korean emperor. The sun and moon motifs symbolize his power over all people and elements.

Shamanism: The Spirit World of Korea
Any understanding of the so-called New Religions of Korea would be difficult without some knowledge of shamanistic influences upon them.