Mr. Eu Hyo-min’s significant testimony about the reality of the “pikareum problem” in the Unification Church 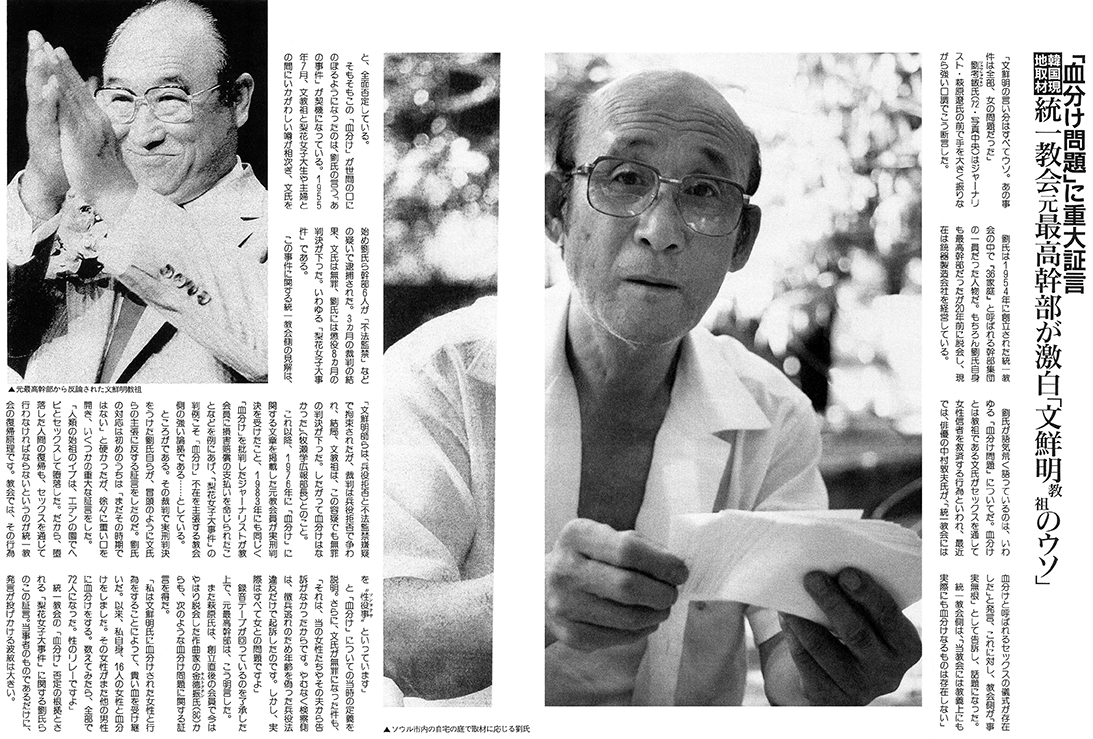 ▲ Mr. Eu, former top UC leader, responding to the interviewer in the garden of his home in Seoul. Photo of Sun Myung Moon: Problems concerning the leader explained by a founder member.

During my on-the-ground research in South Korea with a former top leader I was told of Sun Myung Moon’s “gigantic lie.” Mr. Moon is the founder of the Unification Church. Mr. Eu Hyo-min said vehemently: “Sun Myung Moon’s excuses are all lies. The ‘incident’ was all about the women.”

Mr. Eu Hyo-min, aged 72, spoke with passion, waving his hands in the air as he answered journalist Mr. Hagiwara Ryo.

The Unification Church was founded in 1954. Mr. Eu was a member of the leading Unification Church group known as the “36 Blessed Couples.” Of course, Mr. Eu himself was an important leader in the UC, but he left 20 years ago, and now runs a firearms manufacturing company.

Mr. Eu spoke about the so-called “pikareum problem.” Mr. Moon, the founder, was said in those days to restore women believers through an act of sexual intercourse, which was known as ‘pikareum.’ The actor Atsuo Nakamura recently said: “There was a sex ritual called pikareum in Unification Church.” [Mr. Atsuo Nakamura later became a politician, and was elected to the Japanese National Diet.] 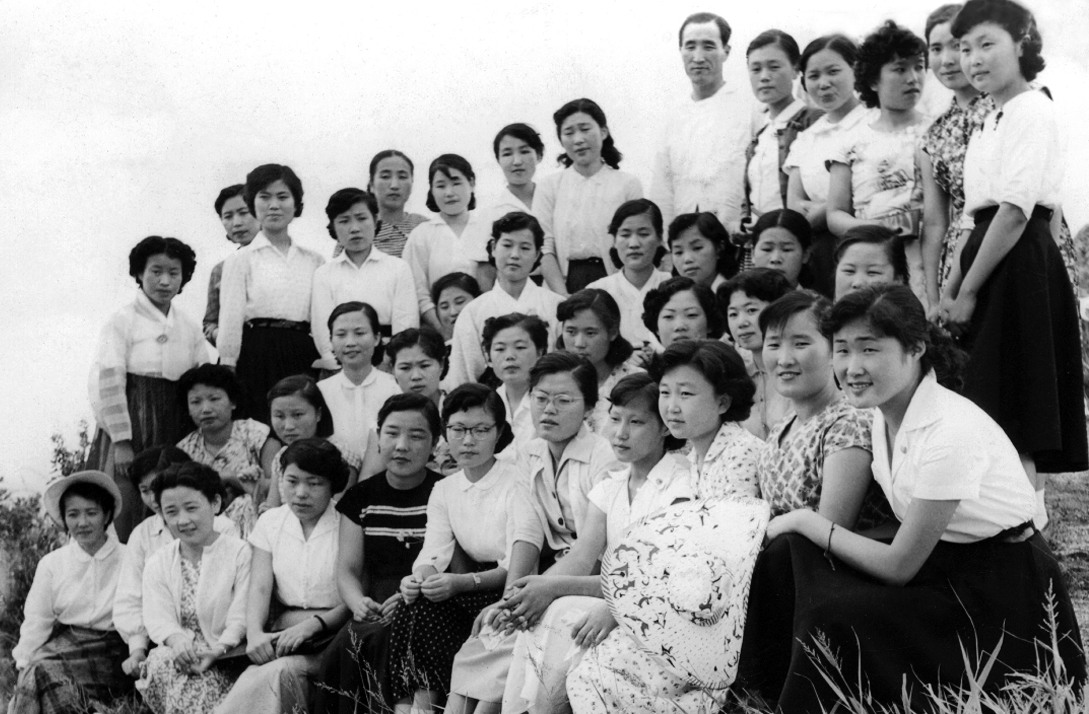 ▲ Mr. Moon with many young women.

The church, on their side, said the story was “groundless.” Recently it has been a hot topic. The Unification Church said, “There is no such thing called ‘pikareum’ in our church, neither is it in our teachings,” and they deny the whole story. The pivotal moment at which ‘pikareum’ became known to the public was due to “the incident”, as Mr. Eu puts it.

But this is an opportunity to discuss “the incident.” In July 1955, a series of rumors which hinted at obscenity successively spread about Mr. Moon, the founder [who was in Seoul], and some Ewha Womans University students. Married women were also involved in the rumors. Six church leaders, including Mr. Moon and Mr. Eu, were arrested on charges which included illegal imprisonment [of a female student from Yonsei University]. After three-month of investigations and trials Mr. Moon was declared innocent. [However, he did admit to the judge in the court, as reported in several newspaper articles, see example below, that he had raised his age to avoid the military draft.] Mr. Eu was sentenced to eight months in prison. It was the so-called “Ewha Womans University incident.”

The Unification Church’s position about this incident is, “The Rev. Sun Myung Moon was arrested on allegations that he avoided the army draft, and of suspected illegal imprisonment. The founder fought the charges on army draft, and at the end of the trial, he was acquitted of both charges. Therefore it was not pikareum,” said Mok Noe-hak 牧瀬学, public relations manager.

He went on to say: “For example, strong evidence that is given to journalists for the absence of ‘pikareum’ is the “Ewha Womans University incident.” A former member of the church, who published an article on ‘pikareum’ in 1976, was jailed. In 1983 a journalist who wrote about ‘pikareum’ was ordered to pay damages to a church member for damage to their reputation.” 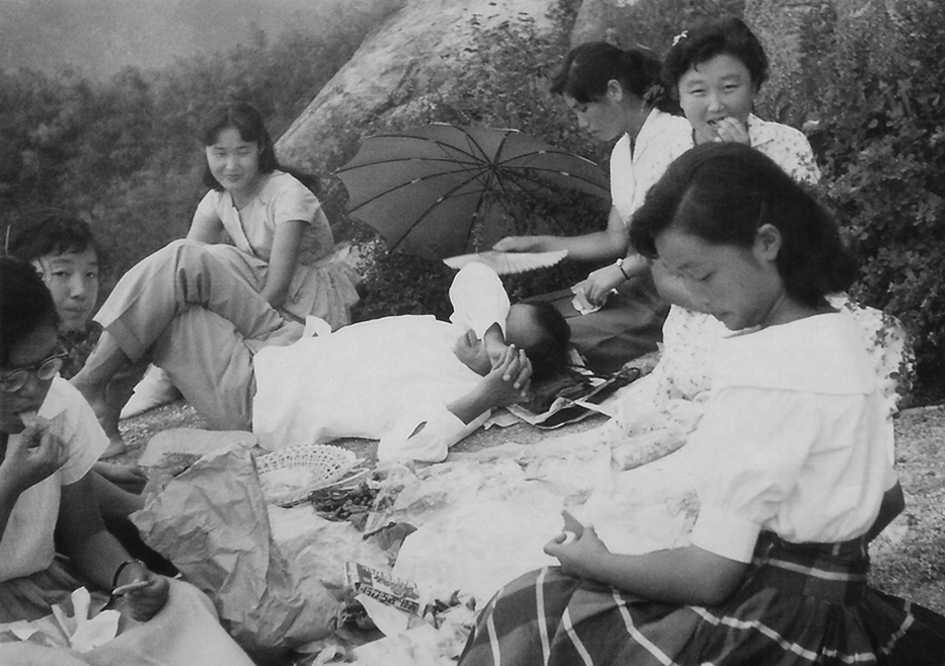 ▲ Restoring so many women was tiring for Mr. Moon.

However, Mr. Eu, who himself was given a prison sentence at the trial in 1955, spoke contradicting Mr. Moon’s earlier assertions. He was stiff at first. His initial response was, “It’s not the time yet.” Gradually he opened up and, in a heavy tone, he gave some serious testimony.

“Let me give an explanation of ‘pikareum’. Eve, the ancestor of human race, had sex with the serpent in the Garden of Eden and was corrupted. It was the fall of man. So, to restore this fall, it is also necessary to perform sexual intercourse. This is the ‘the Principle of Restoration’ according to the Unification Church. In the church this act is called ‘sex yakuji 性役事 ’. [This means ‘an obligatory or necessary sexual ceremony.’] This is the definition of ‘pikareum.’

“Furthermore, as for the matter of Mr. Moon being found innocent, it was because there were no complaints from these women or their husbands. Therefore the prosecution could only prosecute him for violation of the draft laws because he lied about his age to avoid military service. However, in reality it was entirely a problem with women.”

Mr. Eu gave consent for his testimony to be recorded on tape. Mr. Hagiwara also got a testimony from Mr. Kim Deok-jin (aged 80) about the “pikareum problem.” He was a composer, and was a founding member of the Unification Church, but he is no longer a member. “I inherited the precious blood by doing a sex act with a woman who had done ‘pikareum’ with Mr. Sun Myung Moon. After that I did pikareum with 16 women myself. The women did pikareum again with other men. When I counted, it became a total of 72 people. It was a sex relay.”

The Unification Church claims the “Ewha Womans University incident” is evidence against the existence of “pikareum.” Yet these words are coming from Mr. Eu who was directly involved in the incident. His remarks are causing large waves. 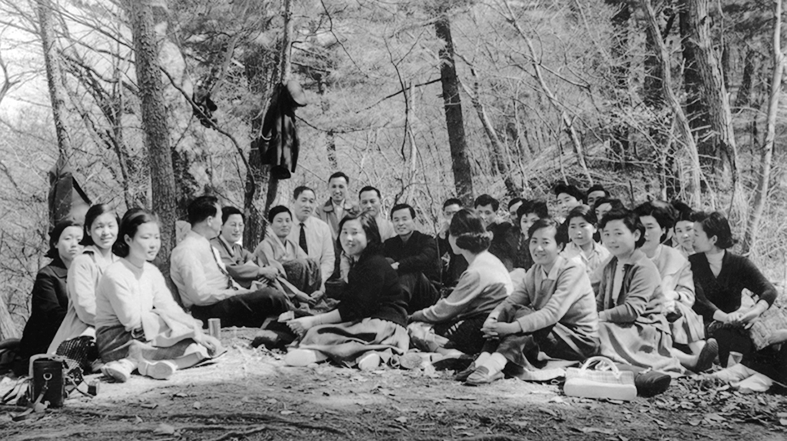 ▲ Mr Moon is fourth from the left. ▲ The defendants in front of the judge at the trial. ‘X’ marks the leader, Moon. Eu Hyo-min is in the center. The others are Eu Hyo-won, Eu Hyo-yeong and Kim Won-pil.

Yesterday the first trial was held in the ‘Unification Church incident’

On September 20, ‘Unification Church’ leader Moon Sun Myung (real name, Moon Yong Myung), aged 36, appeared for the first day of his trial in Seoul District Court No. 4. At the 10:30a.m. hearing the presiding judge was Yoon Hak-no ( 尹學老 ) and the prosecutor was Kang Seo-yong ( 姜瑞龍 ) who was handling the prosecution of Moon Sun Myung. [The afternoon hearing was at 2:30p.m.] On this day the court was jam-packed with many women who seemed to be ‘Unification Church’ believers.

Defendant Moon, who has been much talked about concerning multiple alleged adulteries, on the day only stood as a defendant for charges of Military Service Act violations. This is because there were no complaints from the alleged victims. Along with him, other defendants from the same church stood trial as well: Kim Won-pil (28, violated the Military Service Act, and had raised his age by six years), Eu Hyo-won (42, failed to report to military record), Eu Hyo-min (36, same charge as above), and Eu Hyo-yeong (35, same charge as above).

As soon as the court session began the prosecution read the list of indictments and then the investigation into the facts proceeded. Defendant Moon did admit that he had raised his age. The legal profession still had two arguments about whether raising one’s age, even when the person subject to the draft was over 32 or 33 years old, was a violation of the Military Service Act. Nevertheless, Prosecutor Kang, in the bill of indictment, pointed out that defendant Moon “had raised his age to avoid the draft (military service) in accordance with the Christian doctrine against injuring others or taking life”. Following earlier report: The first trial regarding the ‘Unification Church incident’ started on the 20 [September 1955]. After investigating the facts, prosecutor Kang Seo-yong ( 姜瑞龍 ), recommended the following terms for the defendants:

▲ Kim Won-pil, Eu Hyo-min and Eu Hyo-yeong
= Each person imprisonment for one year and six months

Eu Hyo-min, one of the 36 couples, gives his testimony: exploited by Moon, then shunned by Moon.

Professor Kim: “The Ewha University reputation damaged for some years”

The Consequences of the Ewha Womans University sex scandal

What was Moon teaching? Pikareum – Moon explains in his speeches