Sun Myung Moon made 120 ‘Holy Grounds’ around the world to connect those nations to himself and to the shamanic powers of the Guardians of the Five Directions in Korea. 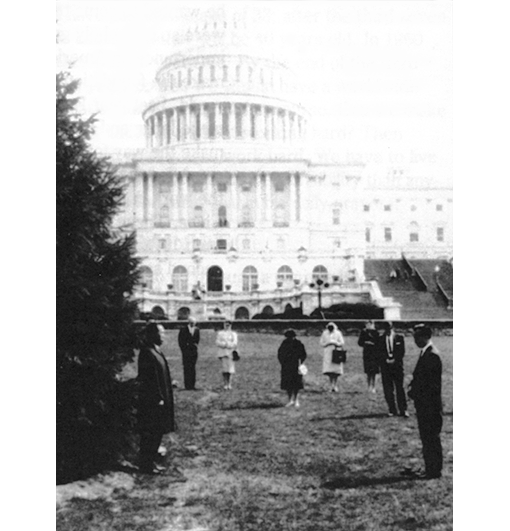 ▲ Sun Myung Moon creating a Holy Ground in Washington, DC, on March 14, 1965. It was next to a large evergreen in the middle of the lawn, west of the Capitol Building. Soil from Korea was buried at the site. Annie Choi, who gave birth to Sam Park about nine months later, may have been one of the participants at this ceremony. 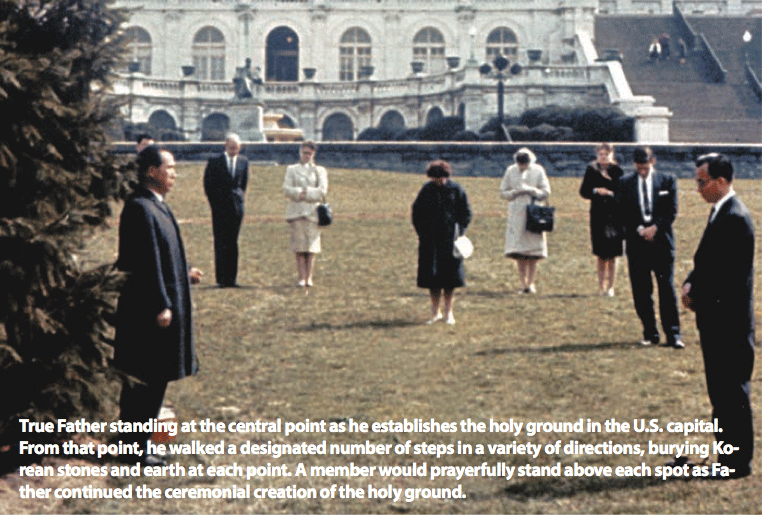 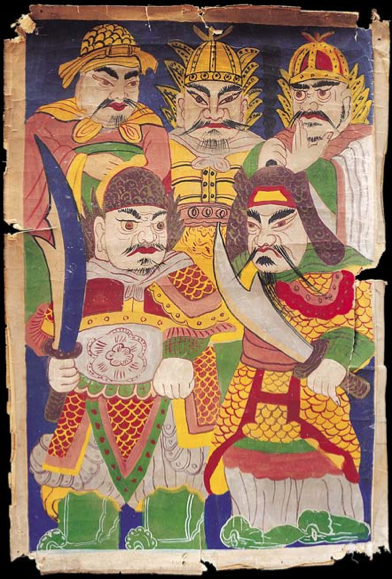 Gods of the Air
1. Obang changgun. Immediately beneath the Ruler of Heaven are his highest subordinates, the Generals of the Five Cardinal Points, the Obang changgun. Although the belief in these spirits is found amongst the Chinese as well, the source for their cult may not be China itself but Central Asia and Siberia. Tribal groups as distant from the Chinese world as the Samoyed and the Yenesei Ostyak in the far west of Siberia propitiate the rulers of the five directions. … What is distinctive about the cultus of these five spirits is the designation of the center as a point of the compass. The use of the number five indicates that the origin of the cult may well be autochthonous to Siberian peoples as they use a five-directional division of the world.

These five great spirits resemble the Siberian master spirits who rule or govern a portion of the cosmos. The division of the spirit world into five grand hordes is also reminiscent of the great tribal hordes which swept across the plains of Central Asia and Manchuria. Neo-Siberian peoples, such as the Mongols, often conceived of their spirits as being divided into hordes under the authority of a superior spirit.

Spirits of the Earth
1. San-shin. Without question, the most important of the earthly spirits is San-sin, the Mountain God.

During Sun Myung Moon’s 1965 world tour he made a total of 120 holy grounds in the 40 countries he visited, many in America. A list of them is below.

An important ingredient in making ‘Holy Grounds’ is seed soil and stones from Korea. Moon buried this material all around the world. He also collected material from each Holy Ground site and took it back to Korea.

Report from his son, Hyung-jin Moon:
“So he [Moon] returned to the Cheon Jeong Gung [the palace at Cheongpyeong] on August 12, 2012 and he rested for a while. Then at 10:00 p.m. that evening, he started coughing. He got out of bed and received a lot of revelations at that point. He did a special ceremony then, covering North, South, East, and West. He spoke a lot of words. It was important that he not speak because his lung function was very weak, so he needed to stop talking, but he kept speaking through the night. He rested a little while, and then he got up in the morning. It was difficult for him to walk normally, so he was in a wheelchair, still connected to the IVs. He said, “Go over there.” The people attending him together with True Mother took him to all the corners of the Cheon Jeong Gung, to the east, west, south, and north. He went outside the Cheon Jeong Gung, to all the major points of the Cheon Jeong Gung.”
[Moon died on September 3, 2012.] 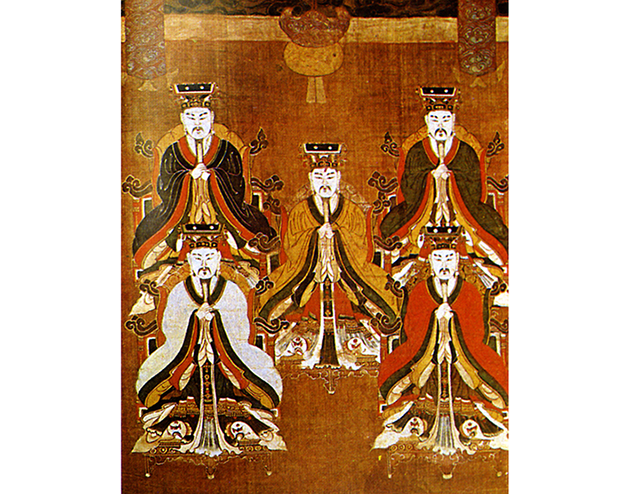 ▲ The Five Direction Spirits Obang Sinjang This is a slightly unusual depiction of them. They are somewhat in the Confucian court style and look more like kings than generals.

Moon’s ceremonies for the creation of ‘Holy Grounds’ around the world are based on the shaman God of the Five Directions and include numerology in the paces to be walked, etc. Each Holy Ground should be established by FIVE members, according to The Tradition book. 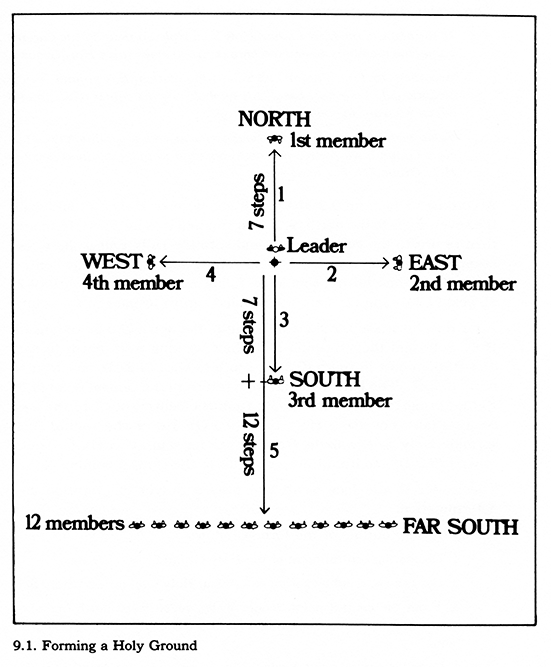 The Tradition book, chapter 9:
“Originally all land belonged to Heavenly Father; it was His creation. Because of the fall, however, God lost everything. After Father’s Holy Marriage in 1960, it became possible to regain land for God through establishing Holy Grounds. It was possible for Father to establish or direct the establishment of Holy Grounds because, as God’s representative, he could reinstate God’s ownership of certain territories. Neither Adam nor Jesus was able to accomplish this, because the second blessing of God must precede the third blessing; therefore, Jesus could establish only a spiritual kingdom.

Furthermore, as Holy Grounds are heavenly property, Father, at minimum, returns them from Satan’s dictatorship to God’s rightful ownership. Symbolically, Holy Grounds are God’s territory. In our prayers, we should visualize that Holy Ground will extend over the whole nation and ultimately the whole world.

From January 28, 1965 through October 10, 1965, Father made Holy Grounds in 39 nations. He returned to Korea and created Holy Grounds in each regional district before establishing the last seven (main) Holy Grounds in Seoul, including the one in Chongpadong Church. … He finished blessing 120 Holy Grounds throughout the world on January 1, 1966. A list of Holy Grounds established by Father himself is included [below]. …

The essential materials for making a Holy Ground are Holy Salt and some soil (earth), including small rocks or pebbles from an established Holy Ground, preferably one made by True Father himself.

Procedure
The leader should select a minimum of five members (ideally 12+5 = 17 or more) to help him or her establish the new Holy Ground.

The leader should go to the central place (tree, rock, etc.) chosen as Holy Ground and bury the pebbles and soil brought from an original Holy Ground along with a small portion of Holy Salt. 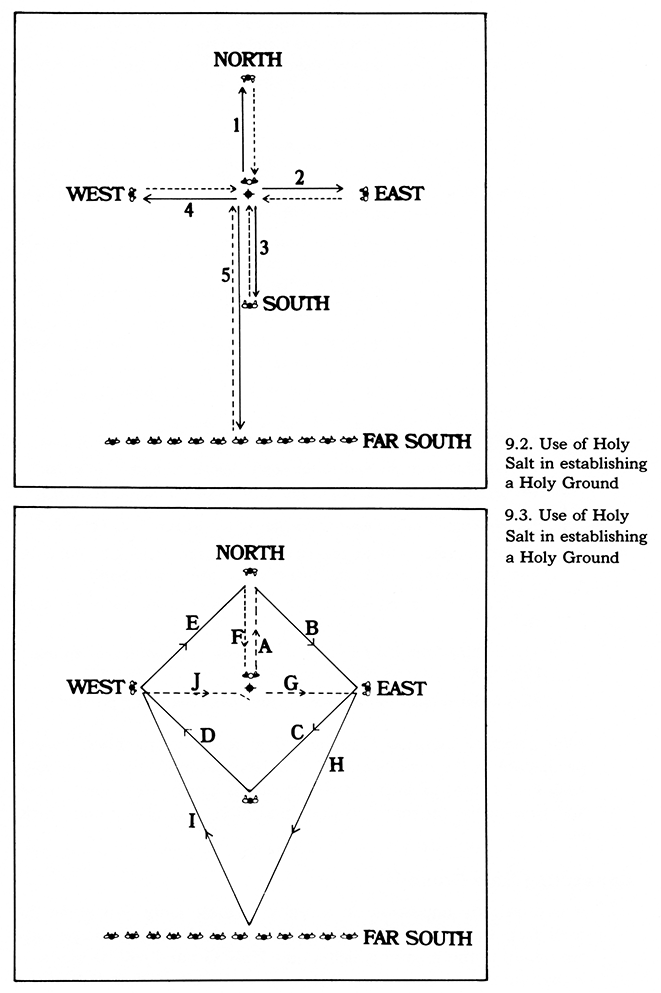 After the leader returns to the central point from the west, he or she should face south and then walk to the far south position (an additional twelve steps from the south position (9.1-5).

The leader should pray so as to include the following points:
• In the name of the Holy Father, Holy Son, Holy Spirit and True Parents name, the members assembled here desire to make this a Holy Ground.
• According to True Parents’ victorious foundation, this ground is now conditionally Your holy base. It is symbolically the center of all ground which we want to claim as Your property.
• Even though we have decided this particular area is conditionally Your Holy Ground, we pledge our determination to make all land become Holy Ground by our hard work.

The 120 Holy Grounds with Dates of Consecration

Note Moon did not leave the US from April to the end of June. He wanted to be sure that Annie Choi was pregnant. ▲ Sun Myung Moon on his return to Korea on October 10 after his 1965 world tour on which Won-bok Choi accompanied him while Hak Ja Han stayed in Korea. Moon is on the left, holding the hand of Hyo-jin. Walking behind him is Hee-jin born who was born in August 1955 – his mother was Myung-hee Kim. Hak Ja Han (in the light clothes) and Won-bok Choi (in the dark dress) are holding the hands of Ye-jin. In the back is Duk-sam Lee holding baby In-jin who was born that August.

Moon returned to Korea on 10.10.1965 – an auspicious date for those concerned with numerology.

Shamanism lies at the heart of Sun Myung Moon’s church, even if it uses a Christian signboard.
Ancestor liberation, bowing to pig’s heads and marriages between dead people and the living are some examples.

Sun Myung Moon – Emperor, and God
Sun Myung Moon copied the Enthronement Hall of the Korean emperor. The sun and moon motifs symbolize his power over all people and the elements. The spirits of significant historical figures, including military leaders, in Korea and ‘providential’ nations were liberated to mobilize them for Moon’s purposes. This is a Korean shaman tactic.

Shamanism: The Spirit World of Korea
Any understanding of the so-called New Religions of Korea would be difficult without some knowledge of shamanistic influences upon them.

Hananim and other Spirits in Korean Shamanism
an extract from the book, Korea: a religious history by Professor James Huntley Grayson

Black Heung Jin Nim – Violence in the Moon church
Black Heung Jin Nim was the name given to Cleopas Kundiona from Zimbabwe. He claimed to be the embodiment of Moon’s son who had died in a car crash. Reverend Sun Myung Moon approved him as his son, but there was a lot of violence in the Unification Church before Moon sent Cleopas home. In Zimbabwe he set himself up as a messiah and abused UC members who had not been warned of his dangerous behavior.

A Korean perspective on Moon and his ‘Fall of Man’ teaching

Fear and Loathing at Cheongpyeong   NEW