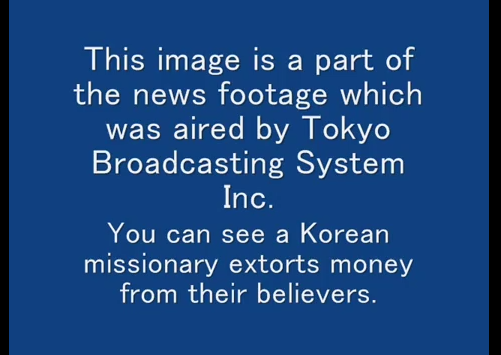 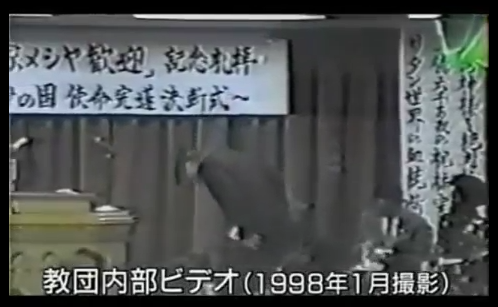 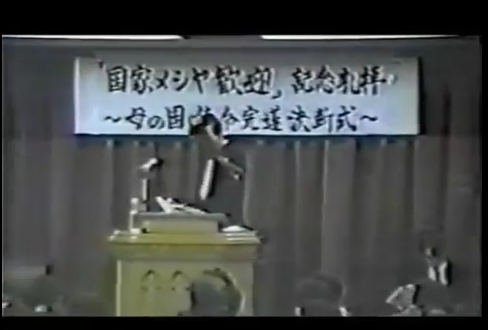 Here is a translation from the Japanese:
subtitle: Video recorded inside Unification Church (filmed in January 1998).
narrator: This is a video made at a Unification Church gathering in Saitama Prefecture in January 1998.
preacher: (speaking in Japanese with a slight Korean accent):
We need to know fully whether my possessions belong to heaven, or to Satan.
We must clearly distinguish the two.
We must recognize them as the belongings of heaven.
Therefore, we must transfer the right of possession.
We need to be conscious about this idea of possession, clearly and truly.
Not taking the side of heaven, means killing all of my ancestors.
It means killing all of my descendants.

narrator: This gathering was held in the year following the South Korean economic break down of 1997. It was said that the founder of the Unification Church, Sun Myung Moon, was facing a crisis, and a contribution of approximately 1,600,000 yen ($12,000 in US dollars at that time) was demanded from each family of believers. 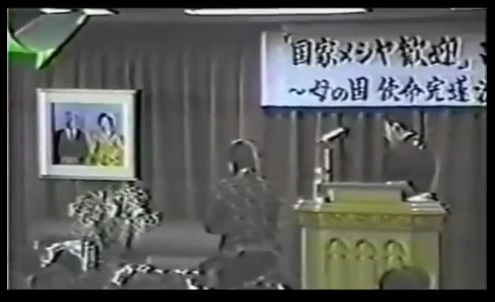 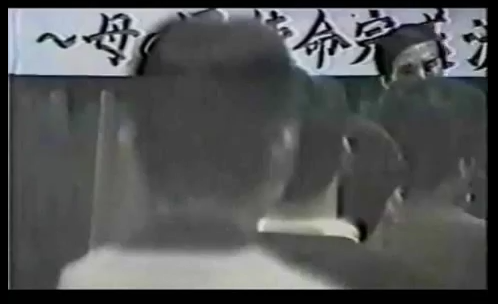 narrator: This recorded video shows the reality of how the missionary, who came from South Korea, extorts money from the Japanese followers. It was shown as evidence at several court trials where former believers sued the Unification Church and demanded compensation.

Note
The word “mother” on the banner and in the song is significant. Moon said that Japan was in the Eve, or mother, position to Korea, which was in the Adam position. Japan was given the mission to nourish (supply money and members to) Korea and for the worldwide providence.

Japan, according to Moon, had to pay great indemnity and repay Korea for the crimes Japan had committed and the resources it had plundered during the 40 year annexation / occupation of 1905-1945.

“Hiroshi Sakazume, the Japanese church’s director general of public relations said, however, that the Japanese church is transferring money overseas. In church theology, he said, it is Japan’s duty to play the mystical role of Eve, giving succor to the church’s children in other countries.”  The Washington Post 1984
LINK

During about 36 months in 1948-1951 South Korean forces killed more South Koreans than the Japanese killed in the 36 years of their occupation of the Korea. There were some 1,222 probable incidents of mass execution without trial by the South Korean forces.
Many mass graves have been found.

New York Times (September 3, 2009)  By Choe Sang-hun
What they are finding as they dig up the remains at Kwangamri, 175 miles south of Seoul, is physical evidence that backs up once suppressed stories of [South Korean] atrocities [against civilians] during the 1950-53 war.

Japan looted for the benefit of the Moons. Complaints reach over $1billion.

information from the National Network of Lawyers Against Spiritual Sales (Japan) 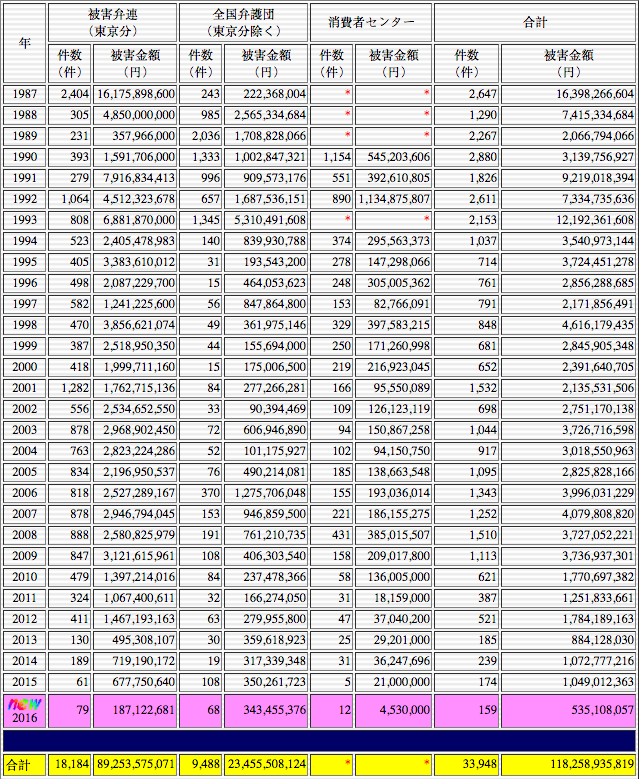 The above chart shows recorded complaints from Japanese citizens against the FFWPU / Unification Church’s “Spiritual Sales”. This abomination goes back decades.

These are the most recent swindling totals, to the end of 2017. Since 1987, when the recording system was first set up, there have been a total of 34,136 claims filed that total over an astonishing $1billion at today’s conversion rate – and here’s the kicker. The people of Japan are not known for filling frivolous lawsuits. Many of the FFWPU/ UC victims are not likely to step forward to keep from losing face.

“The true figure of victimized citizens, however, is assumed to be over ten times more than what is recorded, for the fear of bad luck from ancestors and repercussions from the FFWPU / Unification Church.”

Some complaints are settled out of court.

That means over the decades the UC has plundered the nation of Japan to the tune of billions of dollars to fund its business and political activities all over the world. A few years ago Hyung Jin boasted that a former director of the KCIA was doing the UC books. They can no doubt show anything they wish as far as how the cash travels. This is the money that goes into the pool that funds things like the Universal Peace Federation, the Washington Times [and most probably construction at Cheongpypeong and of various holiday resorts in Korea]. Hyung Jin has stated that money from Japan goes to the UPF and past news articles have quoted Japanese members as saying cash from Japan was “earmarked for the Washington Times.” (Washington Post Sept. 16, 1984)

The government of Japan has strict laws about what religious organizations can do with their income. It is highly probable that the UC has broken those laws by supporting overseas businesses. A recent court case that the UC lost may have brought government prosecution closer.

The activities of the Unification Church of Japan – by Lawyers’ Network

The Moons’ palace at Cheongpyeong cost over $1billion.

Where did the funds for that come from? Cash payments made at Cheongpyeong for ancestor liberation? The Japanese had to pay much higher rates compared to anyone else. 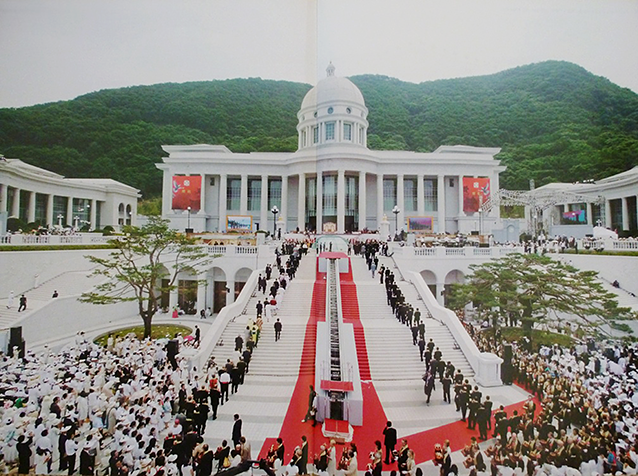 ▲ Sun Myung Moon and Hak Ja Han were each presented with 120 crowns ( = 240 crowns) at the opening of the Cheongpyeong palace in June 2006. The crowns can be more clearly seen in the enlarged section below. (The crease in the center of the photo comes from the magazine it was printed in.)

In a first-ever ruling on religious group tactics to canvass offerings, the Supreme Court on Sept. 18 upheld a high court decision that ordered a religious organization to pay 37.6 million yen in damages to two Fukuoka women who were coerced to donate their assets.
The Holy Spirit Association for the Unification of World Christianity, generally known as the Unification Church, had appealed to the Supreme Court soon after the Fukuoka High Court ruled against the church in February 1996. After the Supreme Court rejected the group’s appeal September 18, presiding Justice Masao Fujii said in a judicial opinion that the high court decision, which found the church’s canvassing tactics illegal, has enough reason to be justified.
Currently, more than 30 damages suits in connection with religious group canvassing tactics have been filed across the country, and the Sept. 18 ruling is expected to affect other pending cases.
According to the Supreme Court ruling, one of the plaintiffs was coerced to offer 30 million yen to the church in June 1988 after being told by a Unification follower at its Fukuoka branch, “You will suffer from misfortunes because of your ancestral karma.”
In January 1989, the other plaintiff was allegedly told by a follower, “The impression of your seal is so bad that misfortunes will come down on you.” She was later persuaded to offer the cult about 2.1 million yen in offerings and as participation fees for seminars organized by the church, the court said.
In May 1990, the two women filed a lawsuit against the Unification Church, seeking 49 million yen in damages. The Fukuoka District Court ruled against the cult and ordered it to pay compensation in May 1994, on the grounds that the church virtually forced the plaintiffs to offer their assets by confining them in small rooms in a church facility.
The district court decided the Unification Church’s canvassing tactics for offerings were illegal, saying that even though the tactics were based on the teachings of the church, they far exceeded any acceptable social standards. After the Fukuoka High Court upheld the lower court decision in February 1996, the Unification Church appealed to the Supreme Court.

Mrs Gil Ja Sa Eu was the wife of Hyo-won Eu who helped to write the Divine Principle.

This happened at the time of the 6,000 couple matching for the Blessing which was held on October 14, 1982 in Korea.

Mrs Oyamada wanted to report about the Blessing in Korea that had just been held. She called a meeting in Osaka for the blessed Japanese members.

The international matchings were being held at the Little Angels School in Seoul, and the mainly Japanese matchings were held at the Sutaek-ri Central Training Center (at Il-hwa) in Guri. Mrs Gil Ja Sa Eu and some older Korean sisters, and some older Japanese sisters such as Mrs Oyamada together with some Japanese IWs (Itinerant Workers) were helping with the matching that Mr. Moon was doing. For example, they explained about illnesses.

When the Japanese members were being matched – either at Sutaek-ri or at the Little Angels School – Mrs Gil Ja Sa Eu said “Because the Japanese have dirty blood, it is very difficult to match the Japanese to Japanese.”

During her talk in Osaka, Mrs Oyamada explained how angry and sad she felt when she heard Mrs Gil Ja Sa Eu say such a thing.

Mrs Oyamada had answered Mrs Gil Ja Sa Eu: “Maybe what you said is true, but as an older sister to us, how could you say such a thing?”

Such words about the Japanese were not only said by Korean UC members, but also by Koreans outside the UC.

“My eyes were opened.” A huge UC scam in Japan is revealed.

Moon personally extracted $500 MILLION from Japanese sisters in the fall of 1993. He demanded that 50,000 sisters attend HIS workshops on Cheju Island and each had to pay a fee of $10,000.

Moon: “Japan should be filled with gratitude to be suffering.”

Japanese 20-year-old woman recruited by the UC, and then sold to an older Korean farmer

Japanese member, Ms. U, married to a Korean man who beat her

Japanese member, Ms. K, was forced to marry Korean man she did not like

Top Japanese FFWPU leader who left, Yoshikazu Soejima, was interviewed by The Washington Post in 1984

Sun Myung Moon makes me feel ashamed to be Korean
1. Moon’s first son wrote a letter saying his father was a fraud.
2. Ashamed to be Korean
3. Sun Myung Moon: “Women have twice the sin”
4. “Japanese blood is dirty,” Mrs Gil Ja Sa Eu said
5. Moon’s Divine Principle Theory Applied
6. Sun Myung Moon’s explanation of the Fall of Man is based on his Confucian ideas of lineage, and his belief in shaman sex rituals.
7. The establishment of a worldwide government under Moon

Japanese transcription of the video text