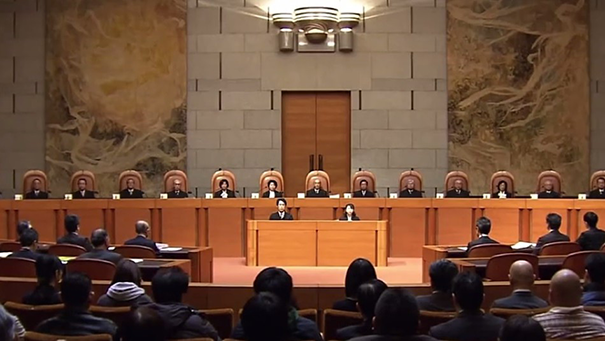 This has serious ramifications.

The Unification Church of Japan (which now calls itself The Family Federation for World Peace and Unification) is worried about the legal implications of the judge’s 2015 statement, upheld on appeal at the High Court.
This could set a precedent for other former UC members who are seeking compensation for the donations they gave, or the time they worked for the UC without pay, or for damage to their physical health, etc.
The members were recruited for religious purposes, but used for profit.

The UC / FFWPU of Japan have decided NOT to appeal again.

The first trial was held at the Sapporo District Court [in March 2014]. Following that, on October 16th in the Court of Appeal at the Sapporo High Court – the presiding judge was SATO, Michiaki – the ruling was given in favor of the three former followers. The judge said they were forced to make donations in illegal solicitation. The former followers sought damages from the Family Federation for World Peace and Unification (previously the known as the Unification Church). The FFWPU was ordered to pay a total of ¥38,500,000 ($321,400 US) to the three former followers in Sapporo and Tokyo.

It was pointed out that [at the first trial at the District Court] in March last year, “the judge determined the missionary activities of the (former Unification Church) followers, which included donations and unpaid sales activities, was for profit. Profit was the inferred purpose [of what the followers were asked to do]. It was not for religious purposes, and that was unfair.” Mr. Sato, the presiding judge at the High Court, also upheld this decision.

(The Japanese text is below.)

Japanese women, full of shame and guilt for their country’s crimes against Korea, prostrate themselves on the ground. 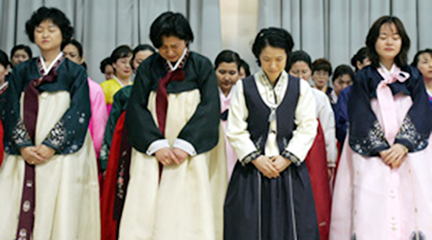 [The 60 women who have accepted Korean husbands] are allowed to wear the clothes of heaven [the heavenly country of Korea]. Tokyo, March 2005. 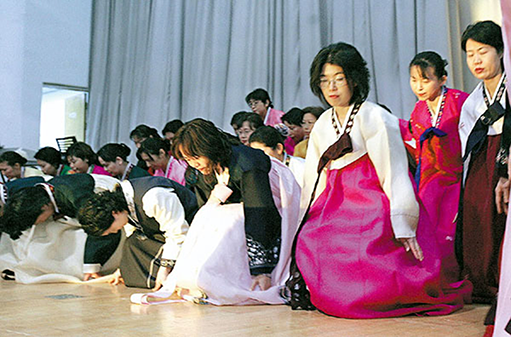 Some of you may think that “it’s just that some stupid women got deceived,” but it isn’t that. What is frightening is what happens after.

The Unification Church deceives the women and pushes [obliges] them to get married and to have children. (They put them in a situation where there is no going back.) All this is to trick the women into soliciting their parents and relatives to become followers or to give money – because it is difficult for people to sue their relatives.

Many of the rich young men and women are naïve. The way of the Unification Church is to tailor fish hooks out of them by deceiving them. The UC can then, without getting their hands dirty, get the parents’ money on these hooks. 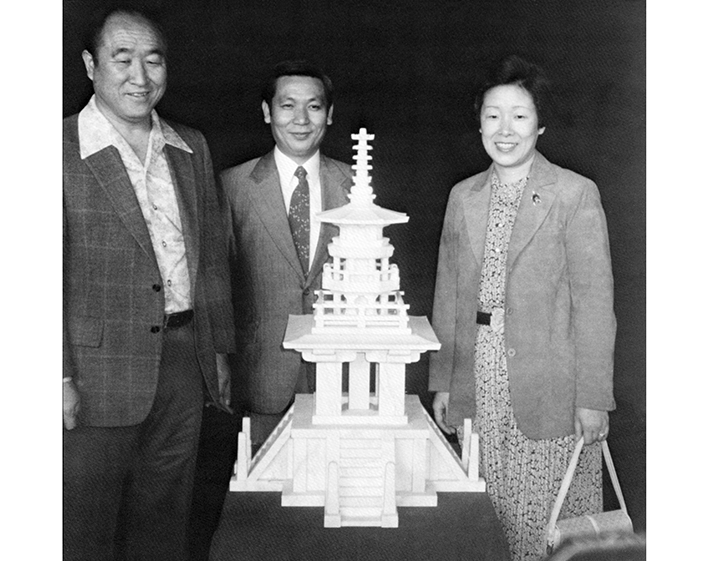 ▲ Sun Myung Moon and Hak Ja Han with a pagoda. The caption was: “Father and Mother with marble sculpture made by our Korean family and sold in Japan.”

The pagoda would ward off the family curse that had caused her husband to die young, the salespeople told her. If she did not buy, they told her during the four-hour session in their closed room, a relative soon would die in a traffic accident.

Later, the salespeople came back for more, according to a scathing 41-page report by a Japanese bar association committee on a sales-fraud scheme sweeping Japan. “Your family’s karma is very heavy. Your husband is still suffering,” the salespeople told the widow.

A daily cup of ginseng tea would appease the angry spirits, the salespeople said, charging the widow $50,000 for enough ginseng concentrate to do the trick.

The widow has lots of company. Since 1980, the Japanese sales-fraud scheme has claimed at least 14,579 victims and $165 million, according to the report issued in July by the Japanese bar association’s consumer problems section.

The pagodas, urns, rosaries, seals and ginseng sold all were produced in South Korea and sold in Japan by companies owned or controlled by what the bar panel tactfully termed “a certain religion.”

That “certain religion” is the Unification Church of the Rev. Sun Myung Moon, acknowledged John Biermans, spokesman for the church in the United States.
The scheme helped Japanese followers of Moon contribute as much as $800 million to subsidize Moon’s U.S. enterprises, according to Yoshikazu Soejima, a Japanese journalist who split from Moon in 1984.

Biermans blamed “communists” in the Japanese press and bar for distorting what he described as “part of the valid spiritual experience of the Unification Church in Japan.” He said investigators ignored “hundreds of thousands” of satisfied customers, including some who “experienced miracles.”

Japanese followers of Moon may have subsidized U.S. church investments, he added, but “we do it as independent people, not as part of our religious activity.”

The bar’s consumer lawyers rejected a similar argument, finding that Unification Church leaders were the manufacturers, exporters, importers, wholesalers and retailers of talismans and ginseng sold in Japan.

In addition, the salespeople – 3,000 of them, by Soejima’s estimate – live in church-owned group homes, use identical sales forms and employ a common distribution system, the report said.

The bar’s panel, after studying the complaints, found salespeople generally used the same tactics learned from a common sales manual, “Your Honey Talk.”

“Your Honey Talk”
A chapter called “Finding Your Customer’s Weak Point” instructs salespeople to first, without admitting they are selling anything, find an anxiety in the prospect.
Many victims, for example, said salespeople used free palm readings to introduce questions such as, “Do you have a terminal illness?” or “Is your family not in harmony?” Some victims were simply told, “You will become seriously ill when you are about 40. It will probably be cancer.”

Responsive prospects, mostly older women, were escorted by the salesman to a church “spiritual center” to discuss their aroused anxieties with “a great teacher.”

The teacher, his eminence plain from the salespeople’s showy deference, generally ascribed the misfortune to restless ancestors, according to the report. “Your eldest son will die because the spirits of your ancestors are not at rest,” is one reported example.
Next, the teacher is said to have told customers, “In order to break the bad karma and save your family, you must become a monk or a nun to appease the spirits, or you must give up your property.”

To resistant customers, sales teams often showed “videotapes of the calamities which befell people who didn’t buy,” according to the consumer lawyers’ panel.
Normally the pitch lasted three hours. Many were longer. As one victim put it, “Continuous persuasion from four in the afternoon until midnight broke my resolve, and I agreed to buy a funerary urn.”

Once a customer yielded, salespeople moved fast, according to the bar’s report, escorting her to her bank, overseeing the withdrawal, and sealing the deal. To subvert cooling-off periods provided under Japanese law, buyers were told that the charms they bought would fail unless kept secret.

Despite strong Unification Church efforts to dissuade victims from suing, recorded consumer complaints add up to more than $165 million in what the bar panel terms “a well-organized nationwide campaign of fraud and trickery.”

That is but a small fraction of the take, the report concludes, because “insecurity and fear have kept the vast majority of victims from coming forward.”

Atsuko Nakajima was about 40 when her husband died of heart disease in February 1988, leaving her with a young daughter to raise. During her grieving, a neighbor stopped by to offer her condolences.

According to her lawyers and court documents, this is what followed:

The neighbor was a member of the Unification Church, but did not mention that at the time. She suggested going to an art show to take Nakajima’s mind off her tragedy. At the show, she persuaded the widow to pay about $2,200 for a painting. It later turned out the painting was purchased from a company owned by Unification Church members.

Two months later, the church member told Nakajima that a “very famous teacher” would be speaking nearby and invited her to come hear him. When the widow met the teacher, he began crying and trembling. “Your husband is descending. I can see your husband’s body suffering in hell. I cannot stop myself from shaking. Your husband is saying he wants you to donate” $50,000.

When Nakajima resisted, the teacher told her, “If you delay your answer, your husband’s body suffering in hell will appear to you in your dreams. You had better decide soon.” Nakajima paid the money.

Several weeks later, the church member and other church members told her that her husband was still suffering in hell. They persuaded her to help him by purchasing a small holy statue and two pairs of prayer beads for about $70,000. She bought a set of signature stamps, commonly used in Japan instead of a handwritten signature, for another $2,000.

In June 1988, four months after her husband died, Nakajima went with several church members to an apartment, where she met a man who appeared to be praying. He told her: “Your husband is suffering in hell. Your husband desires [about $500,000]. But your husband says that at the least he wants you to donate [about $300,000].”

Nakajima replied that if she paid that much, it would drain the remainder of her husband’s life insurance payment. She said she needed the money to send her daughter to college. She was told that her husband died because of bad karma from his ancestors and that if she did not donate, her daughter’s life would be shortened by the same bad karma.

Fearing that the church members would never leave her alone, Nakajima relented. She turned over the cash to a church member who told her the money would be used in a Unification Church project to build a tunnel between Japan and South Korea. At a party at a Unification Church to celebrate her donation, she received a photograph of the Rev. Sun Myung Moon and his wife.

In 1989, Nakajima hired lawyers to sue the Unification Church. …

For the full story, see:
http://www.washingtonpost.com/wp-srv/national/longterm/cult/unification/widow.htm

This is a rough translation:

In this lawsuit at the Tokyo District Court filed by a woman in her 60s, who is a former FFWPU member living in Tokyo, she sought a payment of about 5.2 million yen. She had been made to make large donations due to illegal solicitations by members of the Family Federation for World Peace and Unification (formerly known as the Unification Church).

In the February 28, 2020 ruling, Judge Shigeru Ito ordered the Family Federation and followers to pay about 4.7 million yen.

Judge Ito pointed out, “Women continue to be horrified and fear that their deceased husbands and eldest sons are suffering in hell, and demands for such donations are illegal acts which deviate from what are considered socially acceptable norms.”

The judge said that the Family Federation had responsibility for the actions of its followers [and that they were not acting independently, which is what the FFWPU usually assert].

The FFWPU member [who had solicited the large donation] refunded about 2 million yen to the former member and claimed that the woman had agreed, before the woman had lodged her complaint with the court, that she would not make any further claims.

However, the judge dismissed [the FFWPU assertion and ordered the higher amount of 4.7 million yen to be paid]. Judge Ito gave the following ruling: “It is unlawful and against public order and morals to waive the woman’s claim without confirming what she had asked for or giving her any explanation.”

Japanese woman recruited and sold by FFWPU to a Korean farmer

Why did a Japanese UC member kill her Korean husband?

Top Japanese FFWPU leader who left, Yoshikazu Soejima, was interviewed by The Washington Post in 1984