Dong-sook nim could only be listed as a ‘True Child’ if she was one of Moon’s children. She was married to Moon’s first son, Sung-jin Moon. 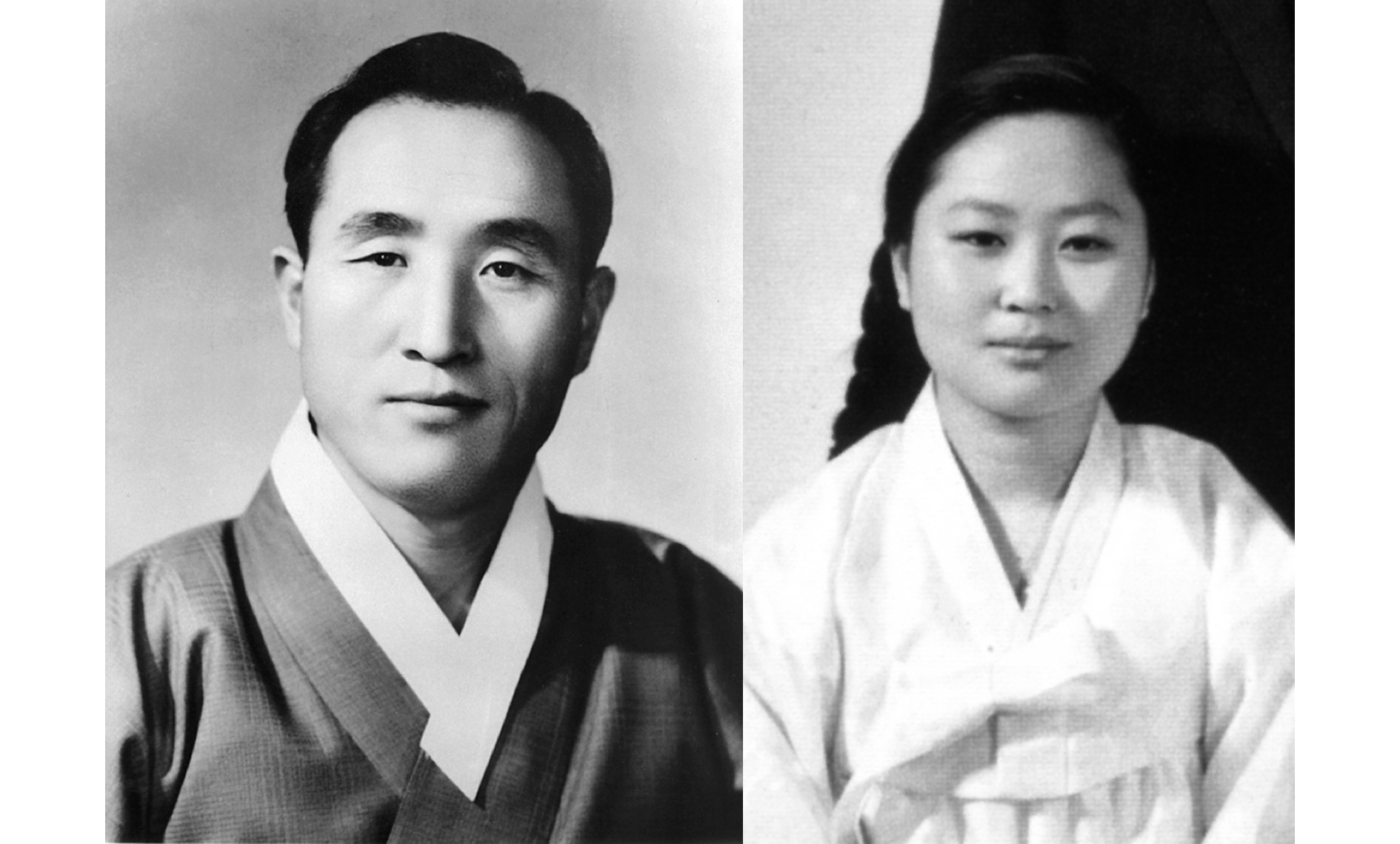 She could only be listed as a ‘True Child’ if Moon was her father.

Moon appears to be talking about Dong-sook as a daughter here:

“… You children have gone and seen struggling families and seen more than Shin-gil had. I am thankful that Hyo-jin talked about him at Belvedere. How many days will you take to begin? How soon will you go? If you have the desire to set your sons and daughters before God on your behalf and be endowed with the right of ownership of everything, you should sacrifice all that and get rid of that desire.
Are Hyo-jin, Sung-jin and Dong-sook here? Haven’t they come? All you daughters should unite and bring your older brother Sung-jin here. His dad fulfilled his responsibility…” 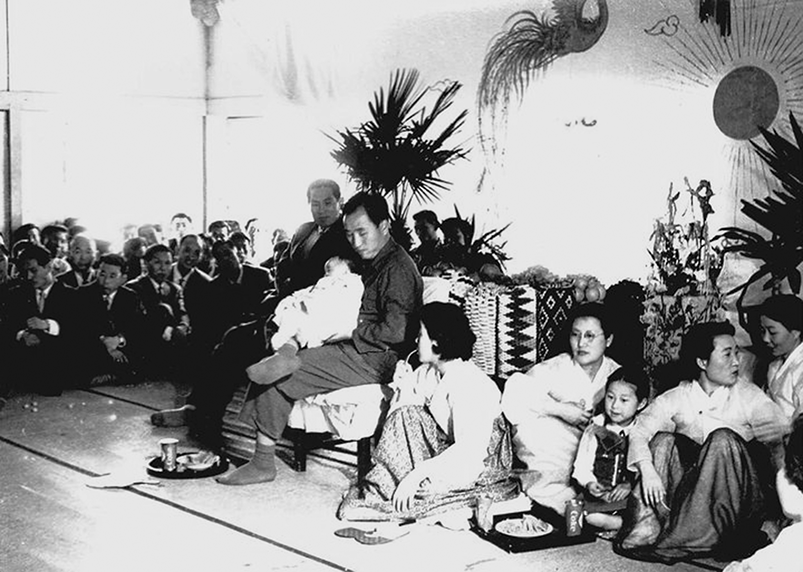 ▲ Dong-sook nim, aged about 6, is sitting on the floor at the Cheongpa-dong Church in Seoul. Moon is probably holding Ye-jin nim, which would date the photo early 1961. 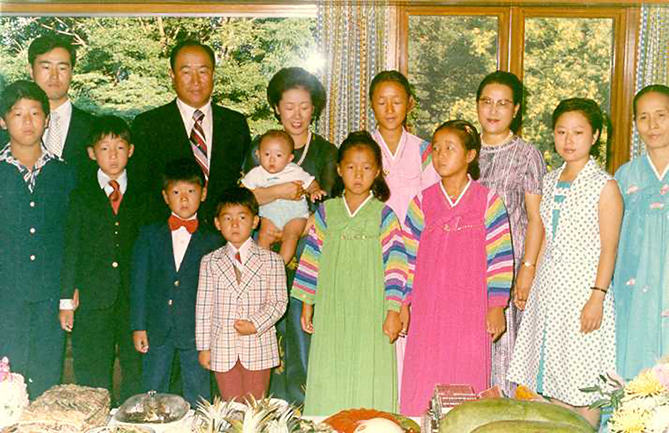 ▲ From the left, Hyo-jin Moon and Sung-jin Moon (in the back). From the right, Soon-ae Hong (the mother of Hak Ja Han), Dong-sook nim and Won-bok Choi.

On July 18, 1973, Moon married Dong-sook nim to Sung-jin Moon. Did he marry his own son to his own daughter – even if they did have different mothers? Was Moon thinking to restore Adam and Eve in the Garden of Eden? 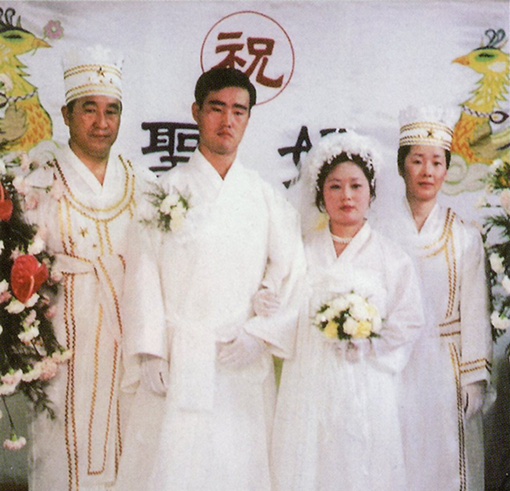 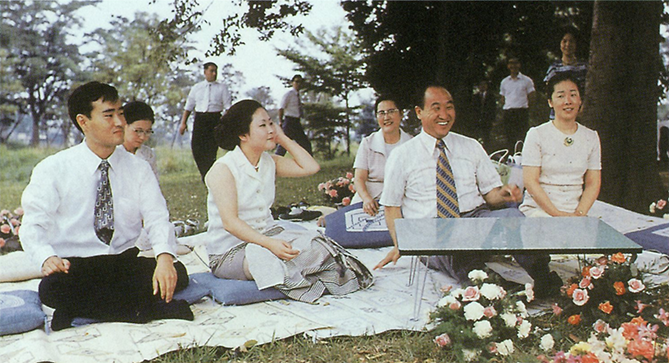 ▲ It was followed by a picnic in Yoyogi Park, Tokyo.

Was it too risky for Moon to hold the wedding in Korea? Too many people there knew that he was the father of Sung-jin nim, and probably also the father of Dong-sook nim.

Sung-jin nim and Dong-sook nim had grown up together with Won-pil Kim and Dal-ok Chong. They must have felt that they were each marrying a sibling. 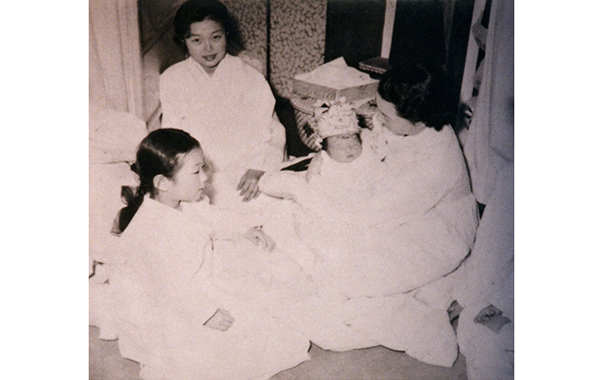 In 1961, Moon asked both Dong-sook nim and Sung-jin nim to participate in special ceremonies to prepare the way for the first ‘sinless child’ ever to be born, Ye-jin.

“About the time that Mother began to have labor pains, a ceremony for the Day of Restoration of the Four-Position Foundation was held, from 10:40 to 10:55 am. This used bowls piled high with rice, beans and chestnuts, representing the sea, the land and the mountains. Father said it was a ceremony through which God, all created things, True Parents and the restored sons and daughters formed a relationship of heart centering on the baby in True Mother’s womb. It began with Won-pok Choi, Jeong-ok Lee and Jeong-hye Yoon offering full bows. True Father offered a prayer, and then Sung-jin nim, Won-pil Kim, Hyo-won Eu, Dal-ok Jeong, Dae-hwa Jeong and Dong-sook Kim offered bows in turn and the same prayer was repeated.

Next, Father indicated the four directions—east, west, north and south—and stated, ‘The mind, representing heaven, and the body, representing earth, were separated, so heaven and earth were separated. However, Father, representing heaven and Mother, representing earth, have restored what was lost and by us the child in the womb is loved, loved, loved.’ Everyone then repeated his last words. Sung-jin nim also stated that the baby was loved and repeated ‘loved’ three times. Next, True Father had three women in the mother’s position, those in the position of sons and daughters, and True Mother, do the same.” 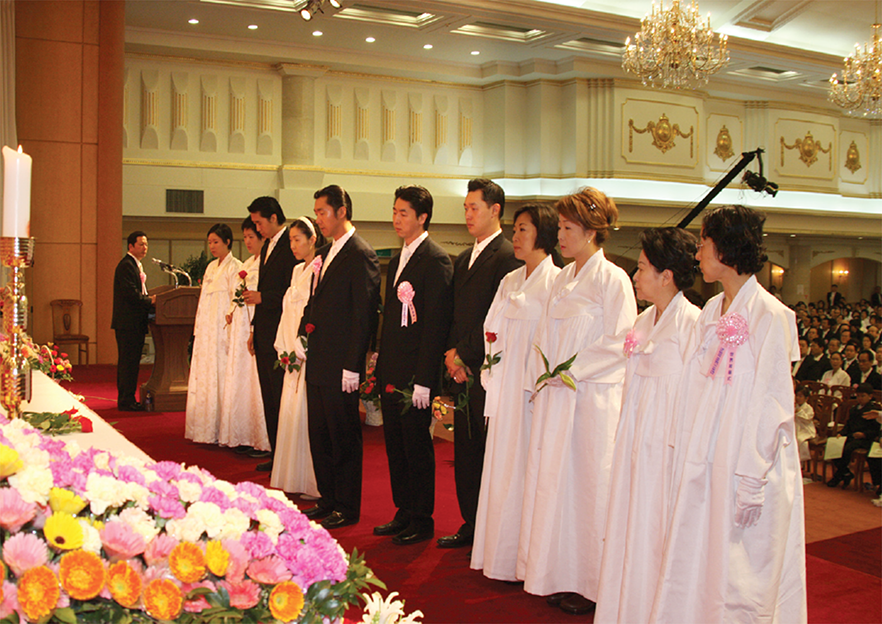 It has been reported that Dong-sook nim’s mother died before 1960. The circumstances of her death are not known.

Dong-sook nim was born on March 7, 1955. She was presented as the daughter of Dal-ok Chong (who was the wife of Won-pil Kim).

It is said that Moon told Won-pil Kim to marry Dal-ok Chong. No marriage date or wedding photographs have ever been found for Won-pil Kim and Dal-ok Chong from 1954. In 1960, they were blessed as a previously married couple.

Dal-ok Chong died in 2000. If Dong-sook nim’s mother did die before 1960, then Dal-ok Chong is simply not her mother. 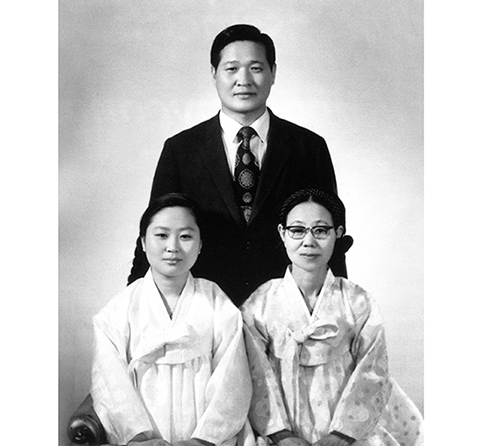 Who would have the correct lineage to be blessed with Moon’s eldest son?
Sung-jin nim’s mother was Seon-gil Choi. (They were abandoned by Moon in 1946, when Sung-jin nim was about 3 months old. Moon left suddenly and went to Pyongyang in North Korea. Moon did not see his son or Seon-gil Choi for at least five years. They had to fend for themselves during very difficult times.)

If Dong-sook nim was the daughter of Sun Myung Moon, she, according to Moon’s thinking, would have the right lineage.

It seems to be most likely that Dong-sook nim was another of Moon’s children who were born before 1960, along with Sung-jin Moon (1946, mother Seon-gil Choi), Hee-jin Moon (August 1955, mother Myung-hee Kim) and, reportedly, others.

According to Chung-hwa Pak, Moon had 11 illegitimate children.
Sam Park is one who is now well known. He was born to Annie Choi in January 1966.

On September 6, 2012 Hyung Jin Moon made a public announcement in the Chosun Ilbo newspaper in Korea. He listed all of the bereaved family members. Dong Sook Kim is listed. Her mother was presumed to be Dal-ok Chong, the wife of Won-pil Kim.

For some additional information there is this Cleopas Kundiona video:

At about the 15 minute mark: “Here in Japan there is one son and one daughter of Mr Moon. [Sung-jin and Dong-sook live in Japan] He divorced his first wife [Seon-gil Choi] and married another lady, Mrs. Kim. When this lady was pregnant, Mr. Moon matched her to Won-pil Kim. And now Mr. Moon has matched his son and his daughter together to start family life, and they are here [in Japan]. Do you think that is a messiah?”

It is not clear which Kim who Cleopas Kundiona is referring to. Myung-hee Kim had a son whose father was Sun Myung Moon. The wife of Won-pil Kim was called Dal-ok Chong. The mother of Dong-sook may have had the family name of Yang. It is clear that whoever the mother was, Dong-sook was hidden with Won-pil Kim and his newly given wife, Dal-ok. 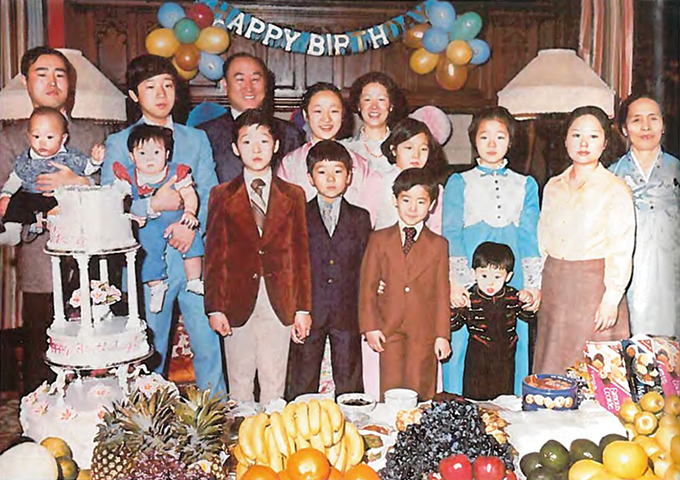 ▲ A birthday celebration for Ye-Jin. In the back from the left: Sung-jin Moon, Hyo-jin, Sun Myung Moon, Ye-jin and Hak Ja Han. From the right, Soon-ae Hong (the mother of Hak Ja Han) and Dong-sook nim. She is a talented artist. 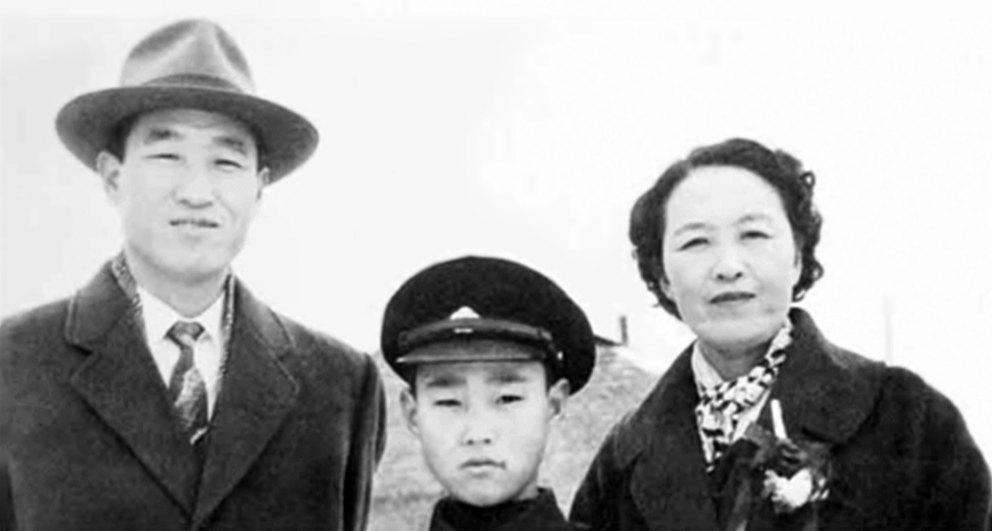 ▲ Sung-jin Moon with his father and Kim Young-oon in 1959.
(His name 문성진 can also be written as Moon Seong-jin.)

He was the first son of Sun Myung Moon. His mother was Seon-gil Choi, Moon’s first wife. Two months after Sung-jin’s birth, Moon abandoned his wife and infant son and moved to Pyongyang. He gave them no financial support. Seon-gil Choi searched for her husband but had trouble crossing the border into North Korea. She eventually found him six years later in Busan on the south coast, but Moon was then constantly surrounded by other women.

Seon-gil Choi had a strong Christian faith and could never accept Moon’s heretical ideas and his pikareum sex rituals. She divorced him on January 8, 1957 due his never-ending adultery. One illegitimate child, and probably more, had been born during their marriage. She was forced to hand over her son to Moon who, however, did not look after him. Moon placed him with Won-pil Kim and other followers. 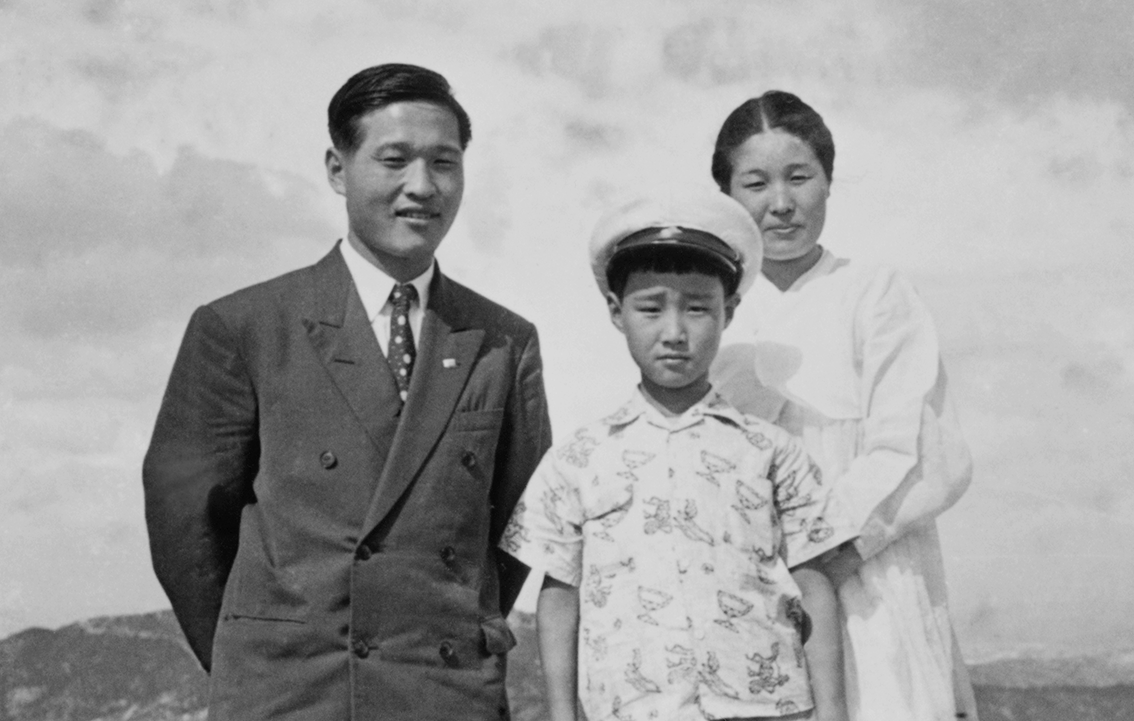 ▲ Sung-jin Moon with Won-pil Kim. On the right is Cheong-sook Park who developed a good relationship with Sung-jin – but Moon pushed her to marry Seong-mo Choi. See ‘Honey Trap’ 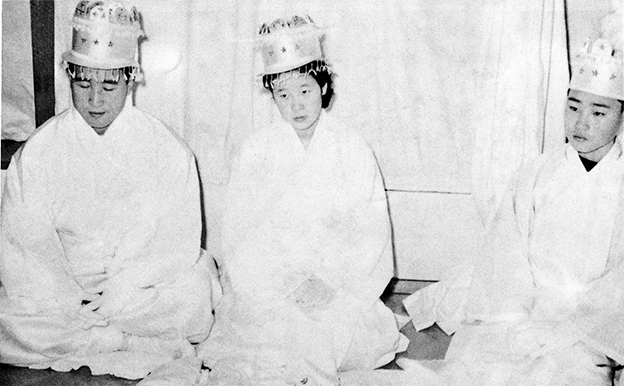 ▲ A dedication ceremony was held after the birth of Ye-jin Moon in 1961. Following the ceremony, Hak Ja Han put a crown on the head of Sung-Jin Moon and they took a commemorative photo. 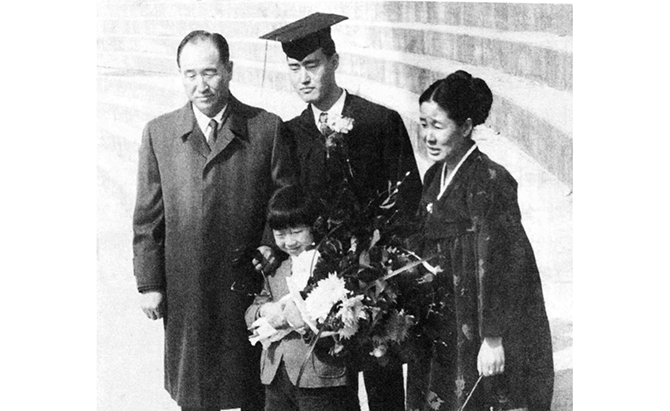 ▲ Sung-jin Moon graduated from Kyunghee University’s Department of History in 1969.

He was uncomfortable with being given a new ‘mother’ Hak Ja Han in 1960, who was just three years older than himself.

In 1974 (a year after his marriage) Sung-jin Moon sent out letters: “My father is a fake Second Coming Messiah”

This has now been translated from the Korean text (see below).

by Myung-hui Kim who was a 430 Blessed Couple:

My father is a fake second coming messiah
In 1974, Seong-jin Moon was the protagonist of the significant “Letter Incident”, in which he personally sent an important personal letter of explanation from Japan, to ten of the leaders in the 36 blessed couples.

The content of the letter was, “My Father, whom you are following, is not the Second Coming Jesus Christ, so it is better for you to go on your own way. It is not too late for you to make your own future.”

The letter caused an emergency at the Unification Church headquarters, and they scrambled to retrieve the letters from each in the group of leaders who had received one.

Immediately after the incident, the former Association chairman, Won-pil Kim, came to South Korea. The case of the letter incident was somewhat resolved by giving the excuse, “Mr. Seong-jin Moon was just trying to test your faith”.

After Seong-jin graduated from Kyunghee University’s Department of History in 1969, he married Dong-sook Kim in Japan on July 18, 1973. [It was asserted that] she was the daughter of Won-pil Kim (a former president of the Il-Hwa pharmaceutical company).

Seong-jin was blocked at Gimpo Airport, Seoul, in 1974 because of his Korean military service duty, and I wonder how he did manage to leave the country after that.

From the book by Myung-hui Kim who was a 430 Blessed Couple:

LINK to the Korean book

LINK to English information about this book

[It seems that he has mainly lived in Japan. Sung-jin has rarely been seen at official church functions. Dong-sook has attended some since the deaths of Hyo-jin and Sun Myung Moon. She visited him in hospital during his final days.] 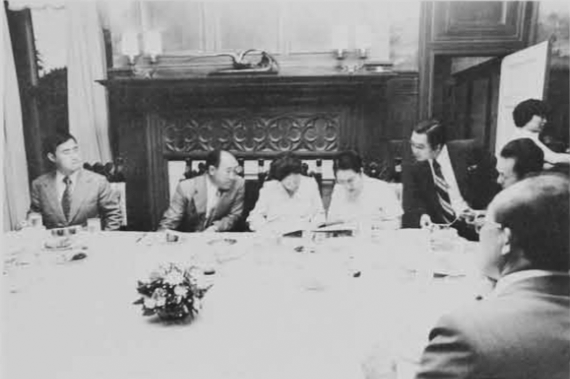 ▲ Sung-jin Moon with his father in the US on June 2, 1976, the day after the New York Yankee Stadium rally.

Jin-Sung Park (husband of In-jin Moon) : “First son from first wife, Sung-Jin, did join but was very negative and rebellious.”

Moon used a ‘Honey Trap’ – Choi Soon-yeong
Sam Park’s uncle, Choi Soon-yeong, explains how Sun Myung Moon destroyed his family and took his mother away to be one of Moon’s ‘Six Marys’, and then Moon pushed a member to marry Choi Soon-yeong’s father. He also talks about his sisters, Soon-shil Choi and Soon-wha Annie Choi, the mother of Sam Park.

Ewha Womans University sex scandal as told in the 1955 newspapers

Moon neglected and beat his own children. How did it affect them?

Two Moon followers both pregnant in 1955

“Annie Choi joined Moon’s church along with her mother and sister in the early 1950s. … followers were expected to sacrifice everything for the church. For young female members, this included their virginity. Choi says the initiation rites for early female disciples involved having sex with Moon three times. She also alleges that Moon kept a stable of a half-dozen concubines, known as the Six Marys, and inducted her into the group when she was 17. Sometimes, she adds, he would assemble them all in a circle and take turns mounting them. Choi’s account is consistent with those of other early followers, who claim that Moon’s church began as an erotic cult, with Moon “purifying” female followers through sexual rites.”

from:
Mother Jones EXCLUSIVE:
Meet the Love Child Rev. Sun Myung Moon Desperately Tried to Hide
How the family values crusader made the publisher of the Washington Times raise his secret son.
by MARIAH BLAKE        December 9, 2013

Sun Myung Moon makes me feel ashamed to be Korean
1. Moon’s first son wrote a letter saying his father was a fraud.
2. Ashamed to be Korean
3. Sun Myung Moon: “Women have twice the sin”
4. “Japanese blood is dirty,” Mrs Gil Ja Sa Eu said
5. Moon’s Divine Principle Theory Applied
6. Sun Myung Moon’s explanation of the Fall of Man is based on his Confucian ideas of lineage, and his belief in shaman sex rituals.
7. The establishment of a worldwide government under Moon