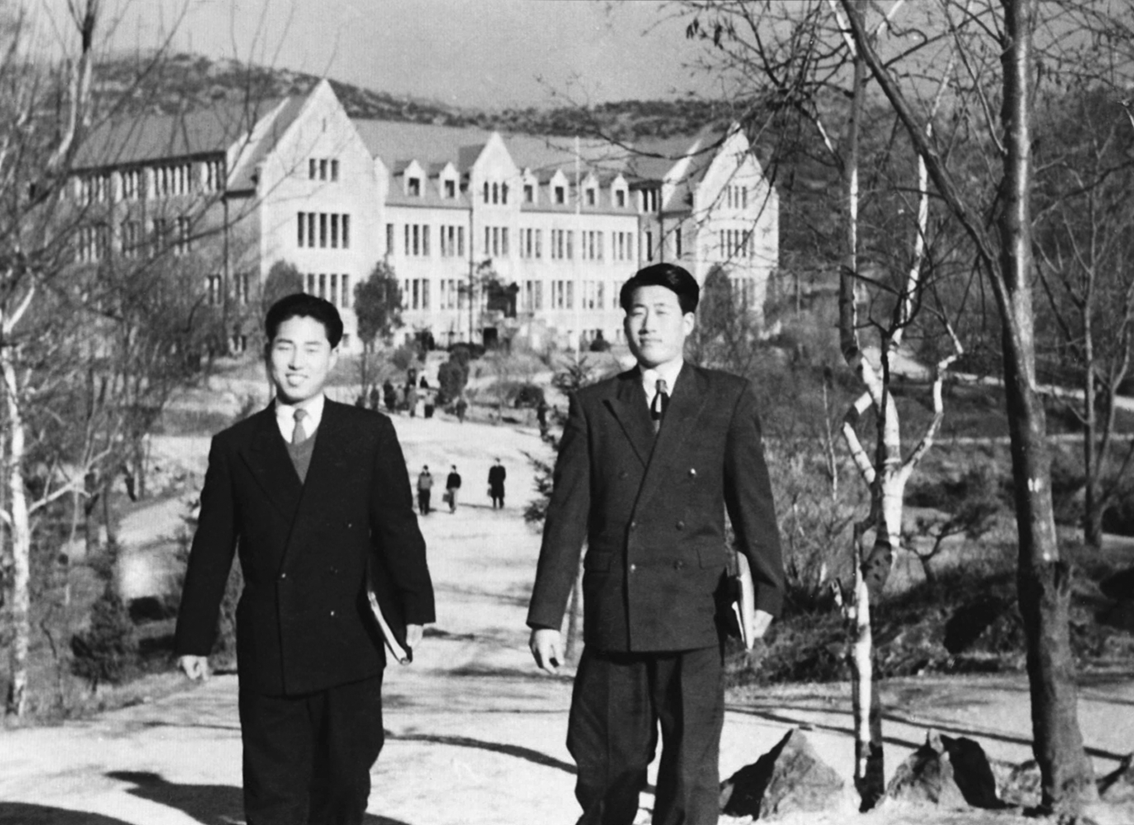 ▲ Unification Church members 劉景圭 유경규 Kyoung-kyu Yoo and 黄煥菜
황환채 Hwan-chae Hwang (later he was one of the 36 couples) witness at Ewha Womans University in 1955. They had both joined as students at the nearby Yonsei University in Seoul. Their names were written on the back of this photo. The main building of the Ewha University campus is behind them. The Ewha Womans University was supported by the US Methodist Church. Neither the university or the Americans wanted cult sex scandals. 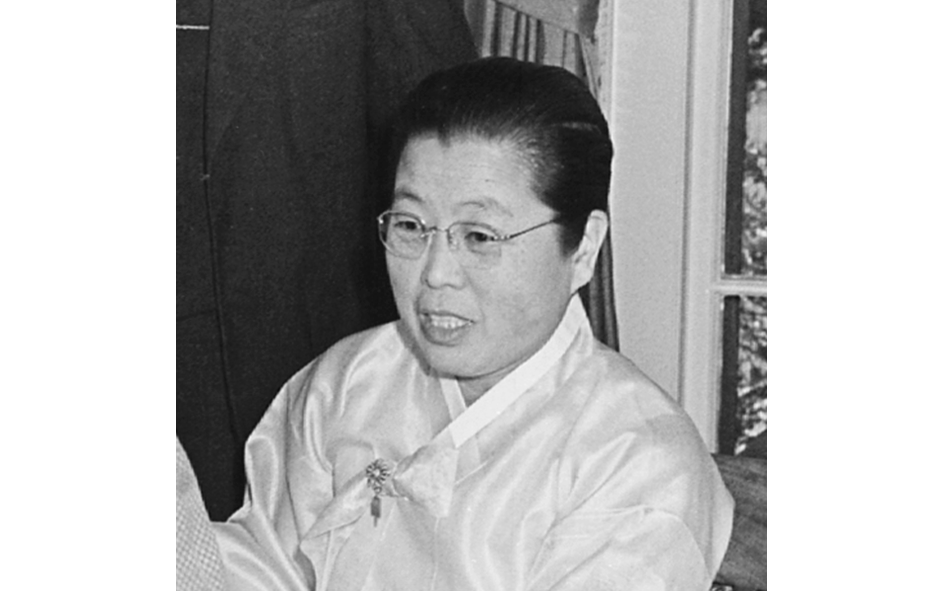 Sun Myung Moon  – March 3, 1976
When I went to the Sodaemun prison… . at the time of the Ewha and Yonsei Universities incident, they would have melted in my hands in six months, but this Hwal-lan Kim [Helen Kim] … She has become a ruined Hwal-lan Kim. [Laughter.] She will be in fine shape in the spirit world! Now you will understand what I am saying. Without something special, would I have a power to melt away in a few months what she established through dozens of years of hard work? This is not done through power of Reverend Moon, but of God.

They now see that the man who had such ability at that time can now work in America with the same ability. Therefore, instead of wasting thirty years, if Ewha University and Yonsei University had united and the established churches had supported me, the world would have come into God’s hands. God has such power. Do you understand this? [Yes.]

Sun Myung Moon  – May 1, 2001
Translated from the original Korean transcript of Father’s words to assembled leaders at the victory celebration for the fifty-state speaking tour of the United States, at East Garden….

The most serious problem was the Ewha scandal. If I had established my foundation centering on the college campuses, I would have easily led the Christians. It would not have been a problem. There were three women opposing me with support from the Korean government. Maria Park, Francesca Rhee and Helen Kim. It was historic. The whole scandal was historic.

So all those foundations made by the heavenly side were lost and I was driven away. In such a difficult situation, I had to solve all the problems of humanity during my lifetime on earth. Do you understand? Not in the tens of generations after me, but in my lifetime. Since Adam could not succeed in his lifetime, I had to indemnify all of human history and bring victory in my own lifetime. You have no idea how suffocated I felt at that time. Please think about that. 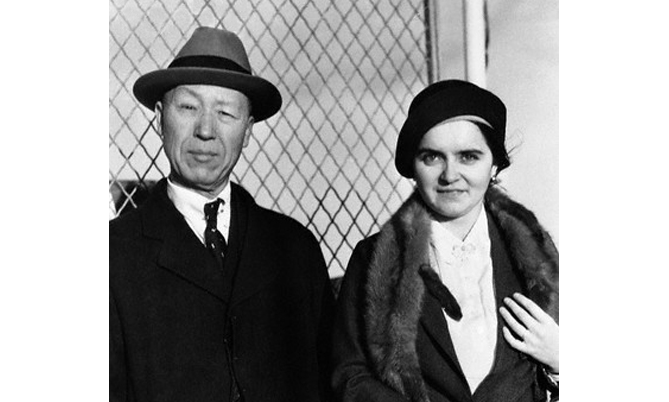 There was nobody I could reach out to for help. There was only God. Even God was not in a position to help me. I had to comfort Him instead. God could not help me. If He had helped me, would Satan have kept quiet? Since I lost the entire Christian foundation because Christians and Jews had not fulfilled their responsibility, I alone had to build the new foundation from the bottom, for forty years… forty years centering on Mother. Our couple had to restore all the mistakes of Adam’s family and the four thousand years of the prolonged history of restoration during forty years of our lives….

We had long roads to walk, rivers and oceans to cross. We had incredible obstacles to break through. We had to solve all the problems for ourselves. That is why we needed to set up conditions of indemnity. Representing the entire world, we had to set up the offering table by ourselves and fight against Satan. Satan opposed our offerings; and God could not accept our offerings regardless of His desire. Without God’s help, I alone had to set up the victorious foundation for God to come down to earth and claim His right of ownership. Our church members must understand this point clearly. Unification Church leaders do not understand that we have to sanctify all of history on the altar of the Total Living Offering.
At this time, you need to make the Total Living Offering… You, rascals! Do you think I set this up as some kind of memorial day title? We are changing the destiny of human history. None of you really understands its seriousness. So I have set up conditions on your behalf to liberate God. Korea alone is not enough of a condition or foundation. The mission of the third Israel is to build the providential foundation of having embraced and absorbed the United States.

Sun Myung Moon  – January 1, 1986, Cheongpa-dong Church, Seoul
The relationship between Korea and America right after the Second World War was similar to that between Israel and Rome respectively; however, America had inherited the tradition of Israel. Although the pagan nation of Rome tyrannized Israel and tried to destroy it, the godly nation of America should have assisted Korea to become a leading nation of the world. In doing so, America could have indemnified the failure of the Israelites to establish a foundation to unite with Jesus.

Instead of uniting under the will of God, Korean Christians united in persecuting our church. If the administrations of Ewha and Yonsei universities – representing the first generation of Christianity – had accepted and united with the students who became Unification Church members – representing the second generation – instead of dismissing them, the government of Korea would have surrendered to the Unification Church. If the Christians in the Abel position had been united among themselves, the government, in the Cain position, would have become one with them automatically. If the Korean government and Christianity had followed God’s providence and accepted True Father and his bride, a God-centered four-position foundation would have been formed at that time. Korea would have become a nation centered on restored Christianity. The ideal of the True Parents would have begun on that strong foundation. That would have been the take-off point for one unified world to begin.

If the American missionaries centered in Korea had been able to become one among themselves, and if the nation of America had been able to become one with those missionaries, then Korea and America eventually could also have been united.
Instead, President Syngman Rhee, Maria Park, who was a powerful person under him, and Helen Kim, the president of Ewha University, became the key persons who persecuted Father. This persecution led to his imprisonment. Syngman Rhee and Maria Park later died miserable deaths. Because of the opposition of the government and Christianity, I had to go to jail. Everything was lost, and the providence of indemnity to relieve God’s grief and pain from 6000 years of history had to begin again.
When I knew that the foundation of faith for the Second Coming had collapsed, what was my responsibility? I had to take all the responsibility – not only for Korea and for Christianity – but also for America.

Sun Myung Moon  – January 26, 2002, Kona, Hawaii
Giving the blessing to the criminal and saints in the brothers and sisters position (in 1998, Madison Square Garden): suppose there is a tidal wave, and in that water murderers and saints drown together. Will they hate each other at that moment, or try to help each other? That is why I am putting them on the same line and blessing them together. So God is liberated, and so your work serves to liberate God. In that priceless era, if someone is a murderer, if he helped a saint be saved, then the murderer can be forgiven.

Helen Kim and Maria Pak, the wife of the president of Ewha Womans University and the wife of Syngman Rhee, almost succeeded in destroying our church in the 1950s. The time is different now. No national level law can take care of Kim Il Sung. He fell into hell, where even Hitler hated him. Stalin was wandering around; Hitler was not in hell, but Kim Il Sung was in hell. I am not a nationalist. Because Satan feels miserable, he knows what God wants, in this last era he will not reject God’s wish, to restore and forgive and bless everyone. No one but True Parents ever thought like this, and gave it to humanity in heaven and on earth.

They were all blessed together, so the criminals, including Satan, have to listen to the saints. I opened the gate for everyone. I got rid of the gate of hell. Everyone was set free – Hitler, Mussolini, Kim Il Sung. Americans should study Rev. Moon. The former Prime Ministers of Japan were told what to do but didn’t do it, so they added more burdens. The same applies to Maria Pak and Helen Kim – I told what to do, but didn’t do it. All of humanity was supposed to be children of God, so to secure them, I have to do something. Hence I have mixed them up and gave the blessing.

In Sang Hun Lee’s message, God asked me to do work in his behalf. That is how serious I am. To liberate the physical world and spirit world, I am serious. If I fail, God’s restoration will fail, so I was so serious.

List Of 34 Spirit Persons Who Were Blessed On June 13, 1998 at Madison Square Gardens by Sun Myung Moon.
By: Kazuto Nishijima  (Japanese NM in Austria)

21. Maria Pak.  Wife of the Vice-President of Korea, was also Vice-President of Ewha under Kim. Her name is Mary (or Maria) Pak. This was under Syngman Rhee’s presidency. She abused her power to persecute us, which led Father to Sodaemun prison. She mobilized five government ministers to destroy Father and the Unification Church. But when the trial was over, Father was acquitted as completely innocent. The country may not be fully aware, but the court record exists. Korean Christianity did that much evil against Father, representing Christianity in general, and especially the American missionaries who were working with Mary Pak. The American missionaries also worked with President Helen Kim, and they influenced American Christianity too against Father.

Moon talks about the Ewha scandal

Dong-sook listed as a ‘True Child’

Sun Myung Moon makes me feel ashamed to be Korean
1. Moon’s first son wrote a letter saying his father was a fraud.
2. Ashamed to be Korean
3. Sun Myung Moon: “Women have twice the sin”
4. “Japanese blood is dirty,” Mrs Gil Ja Sa Eu said
5. Moon’s Divine Principle Theory Applied
6. Sun Myung Moon’s explanation of the Fall of Man is based on his Confucian ideas of lineage, and his belief in shaman sex rituals.
7. The establishment of a worldwide government under Moon
8. Sun Myung Moon in 2012: “There is no Mother”
9. Sun Myung Moon’s words on Hak Ja Han, Justin Kook Jin and Sean Hyung Jin
10. Hak Ja Han married “God” in January 2012. Moon was furious.
11. The Sokcho Incident – the removal of Hyun Jin from the succession
12. In 2018 Hak Ja Han was questioned about the Sokcho Incident