Sa Gil-ja (36 couple) on the 1955 Ewha Womans University Sex Scandal. She was one of the students who was expelled.

▲ Sa Gil-ja (also known as Gil-Ja Sa Eu) was one of the first three couples of the 36 couples. She was married to Eu Hyo-won who helped to write the 1957 Divine Principle.

Sun Myung Moon was known as ‘Mun Yesu – Jesus Moon’ and the ‘physical Jesus’ in the 1950s.

Early 1955 at Ewha Womans University, Seoul: “I bought many Bible commentaries, and read them but none of them had what I was looking for. Whenever I received expense money from home, rather than buying clothes, I would buy books in this area and try to work out my questions. Toward the end of my junior year I began hearing a strange rumor.

“They said there was a ‘Unification Church’ which would solve all the unknown facts about the Bible, and that a Moon Jesus had come.  At first I paid no attention, because this group said that Jesus would come as a man and I always had believed he would come on the clouds. As the days went by, however, more and more students in my dormitory began going to the Unification Church. Particularly my close friend Shin Mi-shik [later married to Papasan Choi, Sang Ik Choi] began going there and invited me to go with her.”
…
“Soon after I began hearing the rumor that Professor Kim [Young-oon] was going to the church, five capable professors, including Professor Kim, and the English literature professor [Choi Won-pok], were fired by the university. They had been told to choose between their academic careers and the Unification Church and had chosen the church.     One evening after dinner I went out on to the field with my friend Mi-shik and as we walked I asked her in a whisper, “Is Moon Jesus really Jesus?” she had been walking a step ahead of me, but hearing my question she turned around and said angrily, “You don’t know anything! How can you be qualified to ask such a question?”     Her attitude was so serious and solemn that I wasn’t able to say anything further. Only my heart was pounding. Soon I said, “Then I’ll go there and see!” My pride had been hurt by her saying that I wasn’t qualified, and I promised to go with her forgetting that I had been resisting her invitations for three months.
She smiled and said, “Then shall we go?””

“At Ewha University, hundreds of students heard the Divine Principle and were moved by it. But in the end only 14 stood firm and were kicked out. Professor Yang [Yang Yun-young] witnessed to Maria Pak, a very powerful woman. She was intrigued by the idea of a man who was “physical Jesus” and was revealing secrets of the Bible. She was brought to the house where Father was teaching at that time, but it was jam-packed; not even any elbow room. Father was poorly dressed and everyone was sweaty and somewhat dirty in her eyes. Finally, she could take it no longer, cried out in frustration, got up and left. Afterwards, Father was told who she was and he was upset with Prof. Yang. “To meet such a person, I need to dress up and meet them in a nice place such as a hotel”, he told her. Reflecting later, he noted, “Compared with Jesus’ manger and the stable where he was born, it was not so bad.” Maria Pak became one of our worst persecutors in Korea.”
June 1, 2001  Washington, D.C. Family Church

“Most of the 124 Couples are from very poor families, and the reason for this is very important for our members to understand. At the time the Unification Church was established, Korea was a very poor country. There were many children of poor farmers who had very little education, because they had to help their family in the fields. Every day they had to go up the mountains to gather sticks for fuel and carry them back down on their backs.

“In 1955 Ewha [Womans] University and Yonsei University started heavy persecution. Because of this the Korean government, all established churches, and all educated people started to persecute the Unification Church. People even wanted the government to stop the movement, to wipe it out. At that time we could not reach any high-level or educated people, so Father sent us out to the countryside to educate these poor farmers’ children.

“We couldn’t say we were from the Unification Church because of our bad reputation, but we could teach them basic things, such as how to read and write Korean or Chinese or English. Through this they became connected to us and some of these young people eventually joined. They went to 7-day workshop, 21-day workshop, and 40-day workshop. Then they left their parents and their farms and became pioneers for the church.

“Of course, their parents were very angry with them because they needed their children to do the farm labor. The children more or less escaped from their families. As pioneers they were very poor, so sometimes they would try to go back to their parents and beg them for a little rice or some money, in order to be able to continue their mission on the front line. But often their parents wouldn’t give them anything.

“When other church members established companies these members could work there, but because of their lack of education and skill they could take positions only as unskilled laborers at very low wages. Most have only a primary school education, and because of the urgency of the providence, they never had a chance to continue their schooling after they joined. All they had was faith in the Principle.” 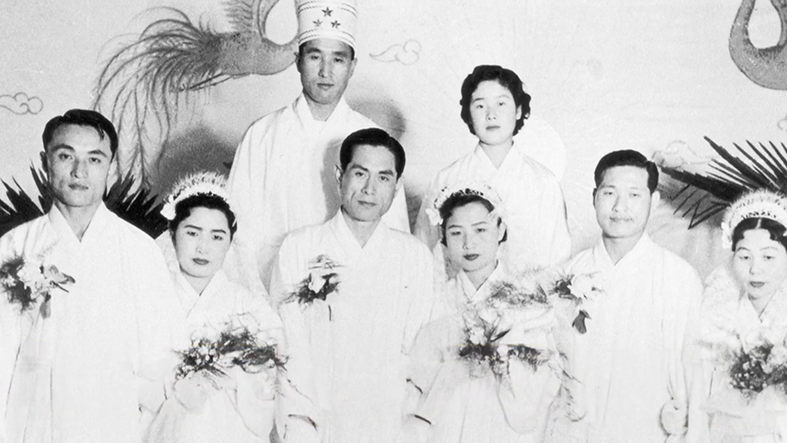 ▲ Eu Hyo-won and Sa Gil-ja are the couple in the middle.

The sex scandal of Sun Myung Moon and the Unification Church as told in the 1955 newspapers.

The Unification Church theology of pikareum sex rituals with the 36 wives, which included Sa Gil-ja

“UNIFICATION CHURCH  … in 1953. [Sun Myung Moon] taught that although Christ had brought spiritual salvation, he, at this time known as Mun Yesu, ‘Jesus Mun’, had brought the necessary complementary physical salvation. He wrote a new scripture, ‘The Divine Principle’, to be added to the Bible, and conducted some dramatic ceremonies, including the Marriage of the Lamb, when he took a very young new wife. He controlled every individual in his flock, conducting mass weddings of couples chosen to be spouses by himself, and instituted draconian evangelistic training for them. He was firmly anti-communist and soon established branches overseas, especially in the USA (where Mun lived after 1973 and there were 3,000 followers in 1980), preaching that full salvation came out of Korea. In 1982 he was convicted of income tax fraud. He then moved to Brazil, whence he returned to Korea in 1998. …”
ISBN 978-0700704644