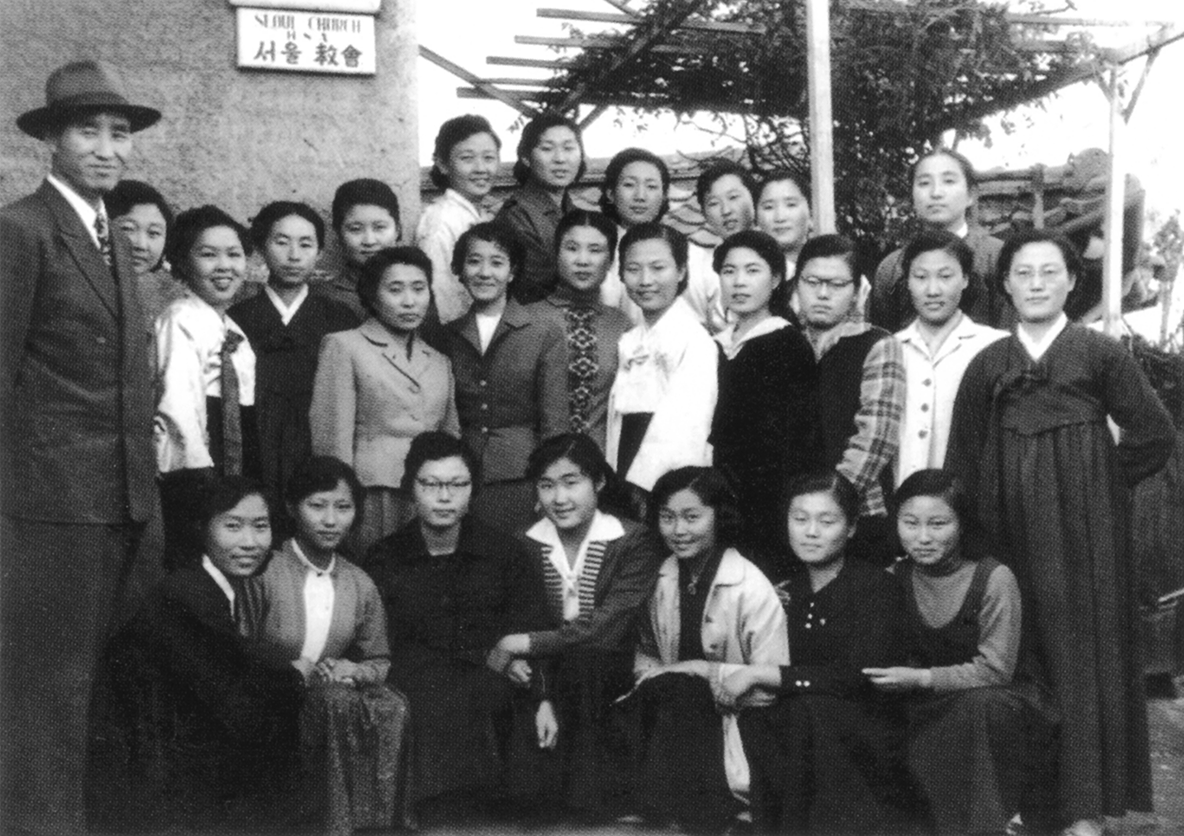 ▲ Sun Myung Moon is standing on the left at a reunion of the students and professors who had been asked to leave Ewha Womans University following their refusal to stop attending Moon’s heretical church.

Professor Kim said that the Moon sex scandal at Ewha University was a huge problem, and that the reputation of the university was damaged for some years. Moon was arrested on July 4, 1955 and charged with adultery with students from Ewha. [Moon was married to Seon-gil Choi from 1945 to January 8, 1957. Adultery was then a criminal offense in Korea for which offenders were jailed.]

Professor Kim felt the reasons they got involved were, for many of them, not really religious. It was partly for the excitement, and partly because they were young people who were just being rebellious.

The following doctrinal statement was filed with the Korean Government by Moon’s Unification Association:

1) The one creator is the only God and father.
2) The only son, Jesus, is mankind’s savior.
3) The Second Advent of Jesus is in Korea.
4) Mankind shall become one united family centered around the event of the Second Coming.
5) Ultimate salvation rests upon the elimination of Hell and evil while establishing good and the Kingdom of Heaven.

In an FBI report a letter written by a Christian church in Seoul “additionally states that the group also secretly observes such other beliefs and practices as the following:

1) Founder Moon is the Second Advent Jesus.
2) A believer receives a spiritual body by participating in a ceremony known as blood cleansing which is for women to have sexual intercourse with Moon and for men to have intercourse with such a woman. This idea of blood cleansing comes from the teaching that Eve committed immorality with the Serpent and she passes on to all of us serpent blood.
3) Secretly observed doctrines are Holy covenant and are of more value than the Bible.
4) Members who have experienced blood cleansing can produce sinless generation.
5) Founder Moon is sinless.”

Pikareum sex emerged at Ewha Womans University in 1955
Reverend Sun Myung Moon’s sex rituals emerged during the Ewha scandal in the early days of his church in Seoul, Korea. Up to 80 students girls were involved.

Ewha Womans University sex scandal as told in the 1955 newspapers
Many original Korean newspaper articles, and a few cartoons, are reproduced with full translations.

Sun Myung Moon’s “Gigantic lie”
Eu Hyo-min (36 couple) gives a significant testimony about the reality of the pikareum sex which he witnessed. All the 36 couple wives were ‘womb cleansed’ by Sun Myung Moon.

Moon admitted to the judge that he had lied about his age to avoid the military draft; he was given a two year jail sentence
Due to their shame, and pressure from their parents, all the girls remained silent in court.

Pak Chung-hwa interviewed about Moon’s “SEX relays”
Pak Chung-hwa was interviewed by a Japanese member of parliament about Sun Myung Moon’s pikareum SEX relays; Moon’s adultery with Kim Chong-hwa who later called him the Great Satan; Moon’s Six Marys theology explained. There were more than 60 women involved, including the virgin, Kim Myung-hee, who gave birth to a son.

Moon’s first wife, Choi Seon-gil, and Kim Deok-jin interviewed
This interview with Sun Myung Moon’s first wife, Seon-gil Choi / Sun-kil Choi reveals his character. She caught him having pikareum sex with two women and she fought her husband. He kicked her. Moon’s academic record was a fraud. A key early UC member, who wrote many “Holy Songs,” corroborates her story.

Moon used a ‘Honey Trap’ – Choi Soon-yeong
Sam Park’s uncle, Choi Soon-yeong, explains how Sun Myung Moon destroyed his family and took his mother away to be one of Moon’s ‘Six Marys,’ and then Moon pushed a member, the ‘honey trap’ to marry Choi Soon-yeong’s father. Choi Soon-yeong also talks about his sisters, Soon-shil Choi and Soon-wha Annie Choi, the mother of Sam Park.

Sun Myung Moon – Restoration through Incest
Moon taught that Jesus should have had sex with his mother (incest) to cleanse her from original sin. Moon’s interpretation of the Fall of Man was based on shaman sex rituals and Confucian ideas of lineage. Moon copied sex theology from other messiahs such as Chong Deuk-eun, Kim Baek-moon and Park Tae-seon.