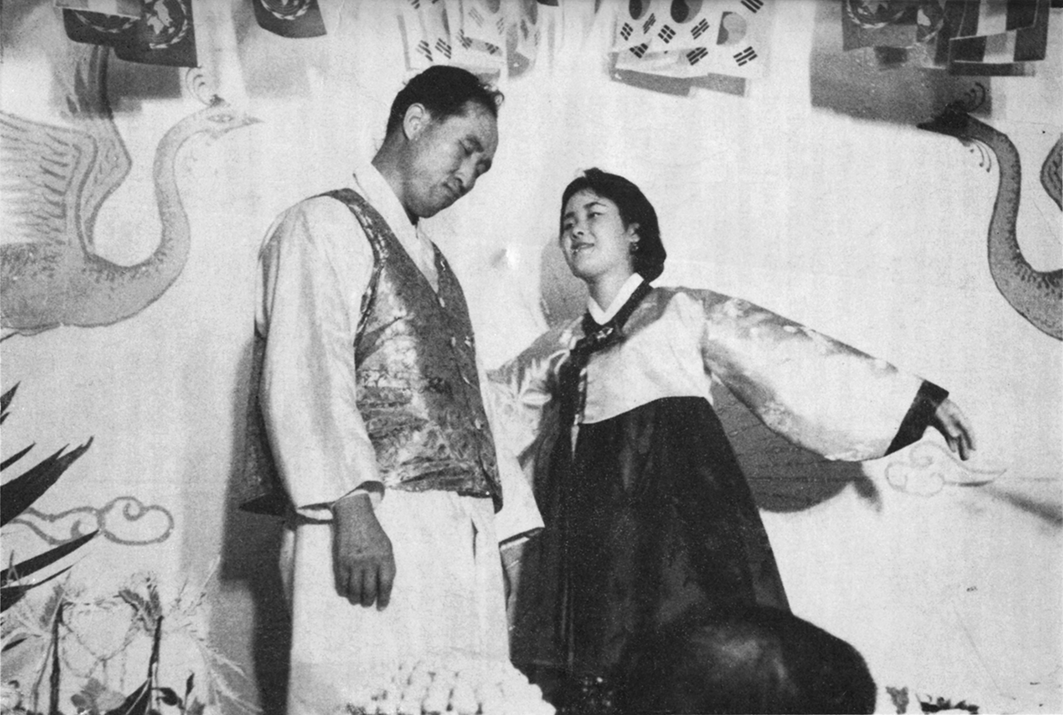 The matter is, in fact, a religious dispute and, as expected, by December 2013, the DC court dismissed the entire case, on the First Amendment of the U.S. Constitution ground that a secular court has no jurisdiction over matters pertaining to religious and theological doctrines.

However, in December 2015, the DC Appellate Court reversed the lower court’s ruling, reasoning that it was premature to decide whether this was indeed a religious dispute over which the U.S. court has no jurisdiction. The Appellate Court ruled that the FFWPU must be given an opportunity to prove their case by conducting “discovery” (The process of gathering evidence under penalty of perjury in order to develop a more complete factual record for the court) in order to determine whether this is actually a religious dispute or not.

Hak Ja Han was deposed (called to testify) in the Washington DC Superior Court on July 13 and 14, 2018. The deposition lasted for approximately 9 hours, about 5-6 hours of which were taken up by translation.

Clocking in at over 9 hours, Hak Ja Han’s depositions in the case are long. Here is a summarized version of each day: 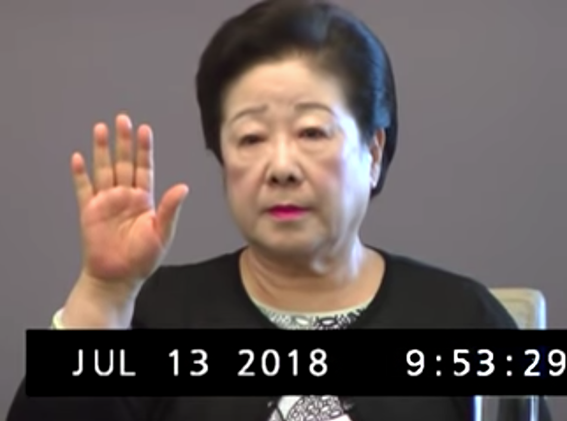 A letter, dated January 2017 from Hyun Jin Moon’s team explains more about the history of the case. LINK

Pence and Pompeo Headlined an Event Mounted by a Group That Says the “Christian Era Has Ended”
And they won’t say if they were paid for their speeches. 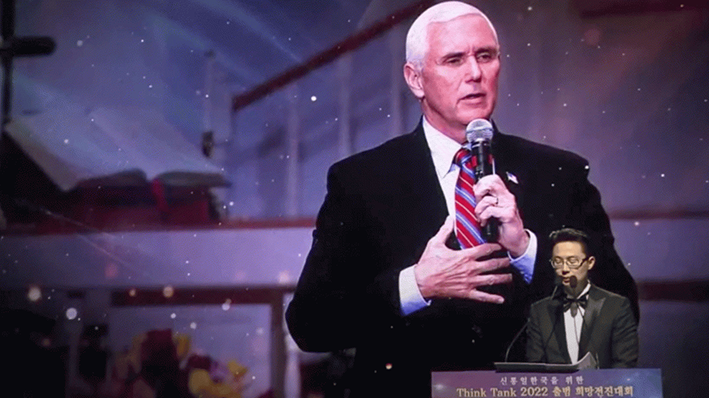 On May 8, former Vice President Mike Pence and former Secretary of State Mike Pompeo headlined a virtual rally organized by an offshoot of the Unification Church, a controversial religious movement known for holding mass weddings of its adherents and that has been accused of being a cult. Though American conservatives have long made common cause with the Unification Church, the head of the outfit that pulled together this event declared not too long ago that the “Christian era has ended”—which means Pence and Pompeo, whose self-professed religious devotion is a prominent part of their respective political profiles, were (knowingly or not) collaborating with and bolstering a group that says it is supplanting the Christianity they embrace.

The event—called the “Rally of Hope”—was hosted by Hak Ja Han Moon, the head of the Unification Church (whose members consider her and her late husband, Sun Myung Moon, the messiahs), and sponsored by the Universal Peace Federation, a group co-founded by the Moons in 2005 and affiliated with the Unification Church (which now refers to itself as the Unification movement). According to the UPF, the gathering, put on before a socially distanced audience and supposedly streamed to 1 million people in 194 nations, was held to launch a project called Think Tank 2022, which aims to reunify the Korean Peninsula.

The UPF says this new outfit is a “global multi-sector network of more than 2,000 experts” in business, academia, and other fields, though Think Tank 2022 does not yet have much (or any) online presence. Still, Hak Ja Han Moon was able to draw an impressive amount of star power for this kick-off, with the event featuring speeches from Pence, Pompeo, former House Speaker Newt Gingrich, former Defense Secretary Mark Esper, past UN Secretary-General Ban Ki Moon, former Republic of Korea Prime Minister Chung Sye-Kyun, and Zanzibar President Hussein Ali Mwinyi. Also among the speakers were Jonathan Falwell, a pastor at Thomas Road Baptist Church in Virginia and a son of Jerry Falwell, the founder of the Moral Majority. Another featured participant was Hun Sen, the dictatorial, longtime leader of Cambodia, who has amassed a horrific human rights record.

The three-hour-long event was a celebration of both Moons, with Hak Ja Han Moon referred to as the “mother of Peace” and “Heavenly Parent.” During his videotaped speech, Pence claimed that Think Tank 2022 is “bringing the wisdom of leaders in government, business, religion, civil society” and that thanks to this new endeavor, “the dream of peaceful cooperation and unity will be closer to reality than ever before.” (Pence spoke at a previous and similar Rally of Hope in March.) Pompeo, who was introduced as a “devout Christian,” hailed former President Donald Trump’s assorted engagements with Kim Jong Un, the tyrannical and murderous leader of North Korea. “We tried something different,” Pompeo said. (Foreign policy specialists have tended to note Trump’s overly palsy overtures to Kim yielded no true progress.) Gingrich praised the Moons, the Universal Peace Federation, Think Tank 2022, and the Washington Times, the conservative paper Sun Myung Moon founded. Esper noted that Hak Ja Han Moon has been “working to help strengthen America’s role in the world.” He didn’t elaborate on what he meant by that.

The rally ended with a ceremony that was staged to look like an official act. A color guard brandishing the flags of nations from around the world marched about. Then Hak Ja Han Moon came out to “receive” the “historic resolution” establishing Think Tank 2022. She signed this document and then struck a gong to declare the project launched.

It’s unclear what Think Tank 2022 is actually doing. The group does not seem to have a website. A week after the rally, the project was not mentioned on the home page of the Universal Peace Federation. Mother Jones sent Larry Moffitt, a spokesperson for UPF, an email with a list of questions regarding Think Tank 2022—who are its 2,000 experts, who is running this operation, how much funding does it have? The email also asked if Pence, Pompeo, Esper, Gingrich, and the other speakers at the Rally for Hope were paid for their participation. Reached by phone, Moffitt said he would look at that email “and get back to you.” He did not.

Pence, Pompeo, Gingrich, and Esper did not respond to questions about their appearances at the event.

The Unification movement has long sought to cultivate allies among Washington powerbrokers, particularly on the right. That was presumably one motivation for Sun Myung Moon in 1982 to establish the Washington Times, which has long been a mouthpiece for Republicans and conservatives. In 2004, he managed to hold a bizarre crowning ceremony for himself and his wife within a Senate office building, during which he declared in Korean that he was the Messiah. (Presidents and kings, he said, had “declared to all heaven and earth that Reverend Sun Myung Moon is none other than humanity’s Savior, Messiah, Returning Lord and True Parent.”) Some members of Congress who attended the event—which was sponsored by the Washington Times Foundation—insisted they had been duped. 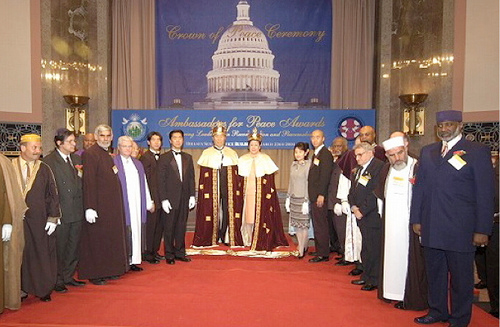 ▲ The March 23, 2004 ceremony in the Dirksen Senate Office Building. Rep. Danny K. Davis (D-Ill.) wore white gloves and carried a pillow holding an ornate crown that was placed on Moon’s head. The Korean-born businessman and religious leader then delivered a long speech. 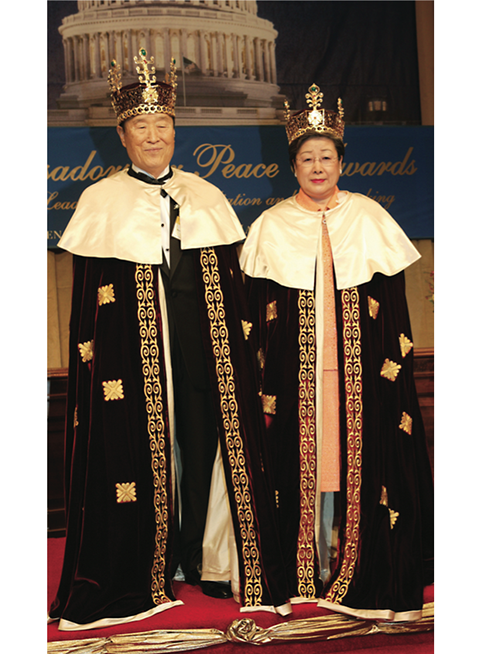 ▲ Sun Myung Moon and Hak Ja Han Moon at the Senate’s Dirksen Building, where they were honored in a “Crown of Peace” ceremony. Several lawmakers attended the event. The crowns have SHAMAN motifs.

Hak Ja Han had to stand in the archangel position while Moon restored the first three wives as a condition for the “Marriage Supper of the Lamb.”

Soon-ae Hong, the mother of Hak Ja Han
Soon-ae Hong was in a sex cult. In 1957 she was jailed for two years for beating to death a mentally-ill boy to remove evil spirits.

Hak Ja Han – Indemnity ended for the Koreans, but not for the Japanese…

Unification Church Proclaims Christian Era is Over; November 2018 Christian Entertainers Open for the Only Begotten Daughter of God

Dong-sook, listed as a ‘True Child’, AND Sung-jin Moon were married