June 18, 2019 Deposition of Hyung Jin Sean Moon in his case against the FFWPU of his mother, Hak Ja Han.

Here are the links to Hyung Jin Sean Moon’s deposition in the Hyung Jin Sean Moon [of Sanctuary Church] vs. Hak Ja Han of the Family Federation for World Peace and Unification and HSA-UWC case in the Middle District of Pennsylvania: 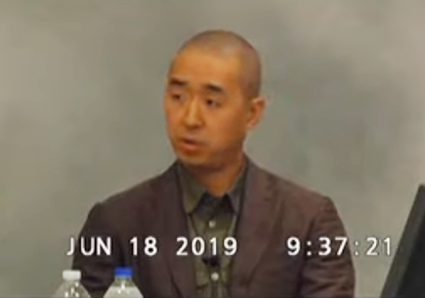 Link to the legal document: 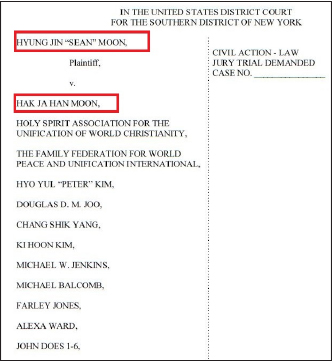 Link to the Sunday Journal news article in Korean.

This edited summary translation with comments has not been verified. The author is unknown.

“Mother has no qualification to be the successor, I am the leader”
Hyung Jin Sean Moon claims he was named by his father, the late Rev. Sun Myung Moon, as the heir of the Unification Church. Sean filed a lawsuit against his mother Hak Ja Han, who claims to lead the Church. Sean says his “Mother is not qualified to be the leader,” and that his mother and those close to her wrongfully took his position away. After Han filed a lawsuit against Sean for trademark infringement last July, he fired back with a countersuit. Despite strong resistance from Han’s side Sean was able to secure Han’s deposition in January. Han will have to go to the United States and face a difficult deposition. Appallingly, the leaders closest to Han approached Sean telling him that if he only keeps quiet until Han dies, they will secure a position for him. But Sean declined their offer. The battle to control the Unification Church is intensifying.

I am the successor, my dismissal is invalid
On February 22, Sean Moon filed a lawsuit in the Southern District of New York against Hak Ja Han, HSA-UWC, FFWPU, and 8 others. Sean is the only plaintiff in the case. His Sanctuary Church is not included in it. Sean put his mother’s name at the very top of the defendant’s list, continuing the battle for the succession of the Unification Church. Sean sees the FFWPU and HSA-UWC as two essential organizations of the Unification Church, where Han and other defendants are board members.

Sean states that in 2009 Han and the Family Federation designated him as managing agent of the Family Federation, which Sun Myung Moon acknowledged on June of 2010. He states that it is invalid for Hak Ja Han to remove him because she has no authority. In his complaint, Sean accused Han and 8 close leaders of hers who hold positions in the Family Federation of severe corrupt acts through which they enriched themselves and received benefits. He claims that they caused great harm to the Unification Church and that they engaged in organized crime (RICO). He accuses them of fraud in money transfers, money laundering, and other such acts.

But essentially, through this complaint Sean is trying to assert that he’s the “true leader” of the Unification Church, further muddying the waters in an already very muddied pool of contenders for that title including Hyun Jin Moon and Hak Ja Han.

Getting a judge to confirm he’s the successor
In his lawsuit Sean says, “I was forcefully removed from my position as board member of HSA-UWC on July 10, 2013.” On February 26, 2015 he was removed as board member of the Family Federation. He believes he was harmed by his mother Hak Ja Han.

Sean states that when he began revealing the corruption of leaders close to Han, they tried to placate him. Leaders close to Han came to him and made a proposal: “Keep quiet until Hak Ja Han passes away. We will restore your authority after she dies.” But Sean did not accept their proposal.

On February 22, Sean submitted a 34-page long complaint to the New York court accusing Han and others of 10 charges. Most importantly to her, Sean is asking the court to recognize that “Sean Moon is the only successor of the Unification Church”. He is also asking for the Cheon Il Guk constitution to be nullified “because the Cheon Il Guk constitution was not approved by me as the only legitimate leader of the Unification Church.”

With both sides holding vastly different and diametrically opposed theological views, this is most definitely a fight to define the nascent Unification Church movement. Undoubtedly, this is a lawsuit in which both sides are fighting for their legitimacy. Expect a long drawn out battle with very high fees.

Han attacked first but backfired
Sean was sued by the Family Federation first for copyright infringement over use of the twelve-gates symbol, but this is the first time that someone’s filed a lawsuit directly against Han. Sean has gone from the defensive to the offensive. In response to the copyright lawsuit, Sean filed a countersuit last September 26 against the Family Federation. In that situation, the court ordered discovery to take place. Discovery is the process where parties in a lawsuit investigate the other party to prove their case.

Attempt to block Han’s deposition
The Family Federation claims that Han is neither a manager, director, or officer in the organization. And that because she is only a spiritual leader she should not be deposed.

Sean requested Han’s deposition stating that she is the managing agent of the Family. And on January 17, 2019, the court ordered the deposition of Hak Ja Han which will take place in the offices of the plaintiff’s lawyers. The order states both parties should figure out the schedule of the deposition. It would be an understatement to say that this is a blow for Han’s side. Despite the court’s order, the Family Federation has not cooperated and tried to use every possible way to delay her deposition. There is no date set for her deposition yet, but with only 2 months left of discovery, the court will be making a decision soon.

If the Family Federation wants to avoid settling with a son that flashes guns and semi-automatic rifles around, Han will have to be deposed. The schism in the Unification Church has gone full circle, but realistically speaking Sean will never be accepted back into the fold or as leader of the Family Federation, much less leader of the overall Unification Church movement; not with his different religious view, after all the insults he hurled, and all the bridges he burned. In the end, it is clear that the ones who will prevail in this situation are the leaders and bureaucratic clerics of the Family Federation who are only waiting for Hak Ja Han to die. They also have a different perspective and different theology from Han and Sean. It’s a cold and calculated move, but after dragging Rev. Sun Myung Moon’s family in a nasty fight and making a spectacle out of it, they stand to benefit the most and emerge victorious.

Ending remarks
There is something to be said about the accusations of corruption and self-enrichment that Sean makes against the Family Federation’s leadership. They ring an alarming bell and are a reminder of Jonathan Park’s serious allegations of breach of duty by HSA’s board members in 2017 for misusing charitable assets. Park’s attempt to reveal and clean these corrupt practices were dismissed and swept under the rug by the Family Federation. Jonathan Park was silenced after he blew the whistle. Now, Sean is suing leaders close to Hak Ja Han for similar corrupt acts.

26:00 “I really feel that this issue about the Six Marys is at the core. It’s interesting because we were already preparing a lecture on the Six Marys. When was this in 2010 I believe or ‘11? We had already given lectures on the Six Marys and we have tried to get the information on the Six Marys. And it’s disappeared. Oh whoops I don’t have on our computer anymore. Whoops we don’t have it on the computer. So we had to get it from somebody who was in those lectures who took notes on the Six Marys lecture. Because guess what folks? Even though it is more comfortable to hide it under the rug and be fraudulent about the whole situation and try to just convince people of their own current times, it’s easier to do that. It’s easier to do that what the church, what mother is doing. Hide it! Don’t talk about it! Don’t bring it up! It’s gonna cause problems. So easy to do that. That’s the temptation. But guess what? Just like the Mormons 200 years later. 200 years later are dealing with the issue around their founder. They’re still dealing with. You understand folks. It never goes away. It will never go away!”

43:10 “He says in public, he says, this only contains 80% of my autobiography. Right? Some of the Japanese sisters maybe have heard that. And then he goes on to call up the four great saints’ wives. You know Mrs. Jesus and Mrs. Buddha and Mrs. Who is it? Muhammad no and Mrs. Confucius so he says this only has 80% of my life story and then he calls up those ladies. See what you don’t realize about who those ladies are. They’re part of the Six Marys.”

48:30 “You see if you don’t understand the bride of Christ, the brides of Christ and you don’t understand the three day ceremony, you have no way to explain why father had to walk that course of having those relationships. What is your explanation? What is it? The only way you can explain this is to say that well I guess father was weak in the flesh. But then if you say that you’re saying that God is weak in the flesh.”

1:04:35 “I remember one time in Washington, DC, they were having an argument. And mother brought this issue out and she condemned father for it. If you, If I didn’t save you from that you would have had children from many, many different bellies is what she said to him.”

VICE
VIDEO: Guns For God: The Church of the AR-15

Locked and Loaded for the Lord

After the Rev. Moon died in 2012, his church split apart. Two of his sons established a new congregation. Their followers are eagerly awaiting the end times. And they are armed.

Sanctuary Church — whose proper name is World Peace and Unification Sanctuary, but which also goes by the more muscular-sounding Rod of Iron Ministries — stands inconspicuously on a country road that winds through the village of Newfoundland, Pa., 25 miles southeast of Scranton. The one-story, low-slung building used to be St. Anthony’s Catholic Church. …

North Carolina Lt. Gov. candidate appeared with religious leader who plans to become king of the US

The Republican candidate for lieutenant governor voiced agreement with a religious leader who says that the “Four Horsemen of the Apocalypse” are the Rothschild family of “international bankers that rule every single … central bank,” the CIA, China and Islam.

The conversation is part of an interview that Mark Robinson did in 2019 with Pastor Sean Moon, whose father Sun Myung Moon founded the Unification Church, which some have called a cult.

Sean Moon’s Pennsylvania-based church believes that the American government will collapse and that he will ultimately become king of the United States, according to a 2018 Washington Post profile.

… Moon explains his theory about the Four Horsemen of the Apocalypse, including the comments about the Rothschild family, which is a longstanding anti-Semitic trope about the influence of wealthy Jewish bankers.

A Pennsylvania event organized by the sons of the late Rev. Sun Myung Moon featured speakers like Steve Bannon, who repeated unfounded claims about voter fraud.

Justin Moon remained in step with his brother and founded the Kahr Firearms Group, which includes the gunmakers Kahr Arms, Auto-Ordnance, and Magnum Research. …

By Champe Barton who started at The Trace as a fellow, and is now a reporter covering community violence and the gun industry.