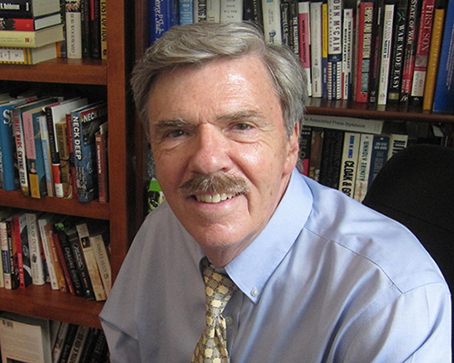 ▲ Robert Parry wrote for the Associated Press. In 1995 he established the Consortium for Independent Journalism. The organization’s website, Consortiumnews, is financed by contributions from readers. Mr. Parry won the George Polk Award for national reporting in 1984. The following year he was a finalist for the Pulitzer Prize.

Journalist Robert Parry of Consortiumnews.com has filed a Special Report on financial problems at Moon’s Washington Times which has been a reliable propaganda organ for the GOP for more than 20 years. John Gorenfeld also joins the conversation, author of Bad Moon Rising: How Rev. Moon Created The Washington Times, Seduced the Religious Right, and Built an American Kingdom. Moon has poured more than $3 billion into this rag, and reportedly much of that money was laundered from drug profits; Parry and Gorenfeld note that the mainstream media and Democrats have accepted the Moonie paper and its biased reporting with little criticism, and that it has been bypassed by Fox News and others as the megaphone for GOP talking points.

The Original ‘Dark Side of Rev. Moon’ Series

Dark Side of Rev. Moon: Hooking Bush   July 28, 1997
Despite his virulent anti-Americanism, Rev. Sun Myung Moon still relies on friends in Washington to help him expand his political-and-media power base. Moon’s latest reach into South America had the helping hand of former U.S. President George Bush. But the Moon-Bush alliance dates back years and could reach into the future, as Bush lines up conservative backing for the expected White House bid of his eldest son.

One Mother’s Tale: Rev. Moon and a College Freshman  July 28, 1997
Rev. Moon may devote much energy wooing power-brokers, but his theocratic movement continues to waylay unsuspecting young people – and wreak havoc on their families.

Dark Side of Rev. Moon: Buying the Right  August 11, 1997
Rev. Sun Myung Moon calls America “Satan’s harvest” and vows to subjugate its people under a Korea-based theocracy. Normally, this anti-Americanism would not sit well. But Moon has spread around billions of dollars from mysterious sources to Washington conservatives. The money has helped key allies, such as Jerry Falwell and Oliver North. It’s the real Asian money scandal – and the Washington media is missing it.

Dark Side of Rev. Moon: Legend & Lies  August 25, 1997
Rev. Sun Myung Moon’s Washington Times is demanding that other media play up hearings on how Asians bought influence with Democrats. In its outraged stance, the Times calls itself “America’s Newspaper.” But it conceals its own role as a secret purveyor of Asian money and its control by the Korean-based Unification Church. Left off the masthead are its publisher, Dong Moon Joo, and its founder, Moon himself.

Dark Side of Rev. Moon: Generation Next  September 8, 1997
In 1982, Rev. Sun Myung Moon went to jail for tax fraud. Yet, new testimony suggests that Moon’s organization did not change its ways. Questionable practices continue, with church money supporting a decadent lifestyle for Moon’s family and with bags of cash arriving from overseas for laundering through church-connected firms, such as the Manhattan Center.

Dark Side of Rev. Moon: Drug Allies  October 13, 1997
Washington is obsessed with interpretations of arcane fund-raising laws. But a more serious question – the political influence-buying of Rev. Sun Myung Moon – remains unasked. The issue is particularly important because of Moon’s free-spending ways and his past alliances with anti-communist crime figures connected to the Japanese yakuza of Ryoichi Sasakawa and the U.S. drug mob of Santo Trafficante Jr.

Dark Side of Rev. Moon: Moon’s Billions & Washington’s Blind Eye  December 22, 1997
Newly released Justice Department files show how the Reagan-Bush administrations cited the Constitution to protect Rev. Sun Myung Moon from investigation as a foreign agent – while using his organization to spy on American critics of Reagan policies. Moon apparently earned his political protection the old-fashioned way: he bought it with lots of money.

Rev. Sun Myung Moon received his status as a U.S. “lawful permanent resident” nearly 25 years ago, during President Nixon’s administration, according to a Justice Department document recently released under a Freedom of Information Act request.

In a letter dated April 7, 1975, James F. Greene, then deputy commissioner of the Immigration and Naturalization Service, listed the date when Moon obtained his “green card” as April 30, 1973. But it was unclear from the released document whether Moon received any preferential treatment from the Nixon administration.

By 1973, Moon already was a controversial figure. The South Korean theocrat was under public criticism for brainwashing impressionable young Americans who were recruited into Moon’s Unification Church. Moon also was raising INS concerns by bringing hundreds of foreign followers to the United States on tourist visas and then assigning them to mobile fund-raising teams.

But Moon was making himself useful to the Nixon administration by organizing support for the Vietnam War and later for Nixon’s defense against the Watergate scandal. Moon’s pro-Nixon activities led to a face-to-face White House meeting between the South Korean and the besieged U.S. president on Feb. 1, 1974.

Though the Justice Department released no documents about how Moon gained his resident alien status, Nixon did have a history of assisting political patrons with immigration problems. According to Seymour Hersh’s The Dark Side of Camelot, Nixon received a $100,000 bribe from Romanian industrialist Nicolae Malaxa, a Nazi collaborator who moved to the United States in 1946. Nixon battled to gain preferential treatment for Malaxa so he could stay in the United States, which Malaxa did until his death in 1972. Hersh reported that the Central Intelligence Agency had a copy of the $100,000 check made out to Nixon.

According to a 1978 congressional investigative report on the “Koreagate” influence-buying scandal, “Moon had laid the foundation for political work in this country prior to 1973 [though] his followers became more openly involved in political activities in that and subsequent years.” The report added that Moon’s organization used his followers’ travels to smuggle large sums of money into the United States in apparent violation of federal currency laws.

That flow of money helped transform Moon into possibly the U.S. conservative movement’s most important source of financial support. Since the early 1970s, Moon has poured billions of dollars into conservative causes, including an estimated $100 million a year to subsidize the daily Washington Times newspaper. Moon’s organization also funnelled money to many conservative political figures, including Rev. Jerry Falwell and former President George Bush. [See The Consortium series last year.]

According to other Justice Department records released under FOIA requests, Moon’s legal alien status has protected him and his movement from government investigations into their sources of money and other legal questions.

Though eligible for citizenship in 1978, Moon never became a U.S. citizen. Then, about two years ago, frustrated by the apparent decline in his church’s membership, Moon began denouncing the United States as “Satanic” and reviling Americans as individualistic. In 1996, Moon moved his base of operation to Uruguay.

Nevertheless, Moon has not renounced his “green card,” according to U.S. officials familiar with his case.

Rev. Moon’s Dark Shadow  October 1, 1998
Rev. Sun Myung Moon’s ex-daughter-in-law, Nansook Hong, has given first-person evidence of the Unification Church’s practice of violating U.S. currency laws. In a new book, she exposes Moon’s money-laundering and reveals the hypocrisy at the core of this right-wing powerhouse.

The Bush-Kim-Moon Triangle of Money  March 10, 2001
At odds over North Korea, George W. Bush and South Korean President Kim Dae Jung have one thing in common: behind the scenes, both have benefited from Rev. Sun Myung Moon’s largesse.

Kerry Attacker Protected Rev. Moon  October 15, 2004
The producer of an anti-John Kerry video, which will be aired on stations across the United States before the Nov. 2 election, also attacked federal investigators who were cracking down on Rev. Sun Myung Moon’s mysterious money flows in the 1980s. A book by Carlton Sherwood helped silence Moon’s critics and enabled the South Korean theocrat to continue funneling hundreds of millions of dollars into the U.S. political process.

The Moon-Bush Cash Conduit  June 14, 2006
South Korean theocrat Sun Myung Moon has long boasted of his ability to “hook” politicians by putting money into their pockets and into their political machines. But Moon’s most important catch may have come from the millions of dollars sunk into the powerful Bush family – and the subsequent lack of U.S. interest in evidence of Moon’s criminal activities.

The GOP’s $3 Billion Propaganda Organ  December 27, 2006
When history tries to make sense of what happened to American politics in this era, it should take into account the extraordinary story of how a right-wing Korean cult leader, Sun Myung Moon, bought influence with the U.S. political class by pouring billions of dollars into conservative causes, including a daily newspaper, the Washington Times.
A Special Report.

Jerry Falwell’s Deal with the Devil  May 16, 2007
American leaders across the political spectrum are eulogizing the late Rev. Jerry Falwell, albeit with some criticism of his tendency to lash out at his adversaries. But lost in this desire not to speak ill of the dead is the troubling story of Falwell’s secret financial dealings with South Korean cult leader Sun Myung Moon and how Moon’s mysterious money bailed out Falwell’s Liberty University.

The Right’s America-Hating Preacher  May 2, 2008
America’s Right is having a field day blasting Barack Obama’s ex-pastor Jeremiah Wright as anti-American. But many of the same conservatives look the other way when their benefactor, the Rev. Sun Myung Moon, denounces the United States.
A Special Report.

How Rev. Moon’s ‘Snakes’ Infested US  May 1, 2010
As Rev. Sun Myung Moon’s Washington Times sinks, snakes are coming out of the woodwork (really), writes Robert Parry.

BBC: Sun Myung Moon – The Emperor of the Universe

FBI and other reports on Sun Myung Moon

In order to rule the world, Sun Myung Moon had to start with Korea.

The Moon Organization and the KCIA – ‘Privatizing’ covert action

Fraser Committee Report on Moon org.:  “these violations were related to the overall goals of gaining temporal power.”

Press Release on the FFWPU by the Department of Communication, Nizhny Novgorod province, Russia

Sun Myung Moon was eager to infiltrate the European Parliament

Mongolia – Battleground of the Han and Kwak groups